We see it Wed-fingers crossed for a nice production. Regards, Len 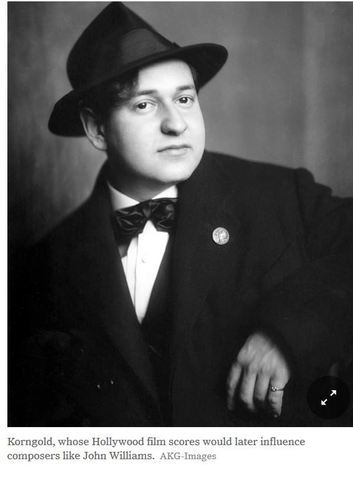 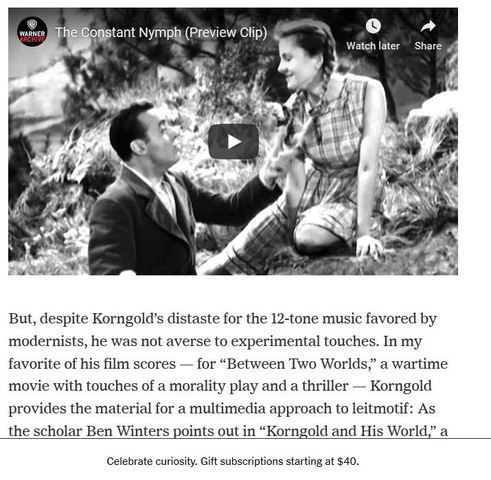 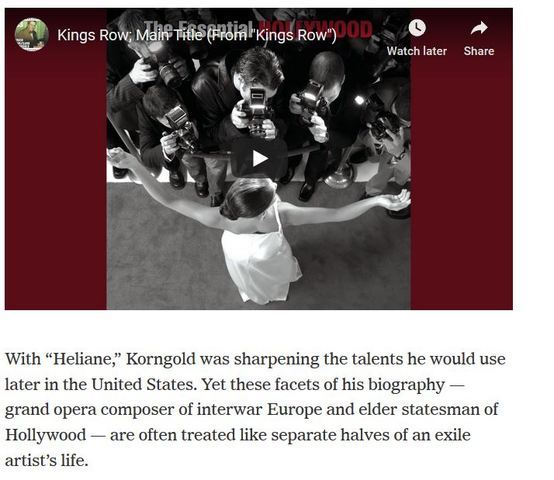 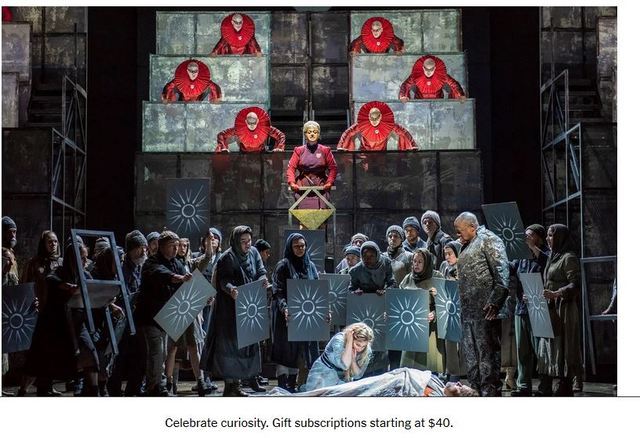 This was a time made vivid by experimental, yet still crowd-pleasing, harmonies, as well as salacious themes that — in a post-Freudian atmosphere — could also lay a claim to seriousness. Those touches were all present in the extremely belated American premiere of “Das Wunder der Heliane” on Friday at the Fisher Center for the Performing Arts here.

And yet there was another era’s musical style stepping into the light for a close-up.

The scoring for one early scene in “Heliane,” between a condemned man and a jailer, at first leans appropriately hard on the strings. Bursts of col legno announce political gravity — and suggest the prisoner’s need for a savior, which the title character of Heliane will become — before giving way to brooding lines. But unexpected jolts ring out: Harps ascend quickly, breaking free of tutti passages that have submerged the sound world in sadness; a mystical celesta accompanies the ambiguous moment when the man’s chains are loosened.

Played brightly and adroitly by the American Symphony Orchestra and conducted by its music director, Leon Botstein, these rapid changes of color didn’t seem like embers of dying Romanticism so much as the first stirrings of the Hollywood epic.


Korngold, of course, would go on to achieve his most lasting fame as a film-score composer. His swiftly surging themes for movies like “The Adventures of Robin Hood” and “Kings Row” have long been cited as an influence on John Williams’s music for “Star Wars” and “Superman.”

With “Heliane,” Korngold was sharpening the talents he would use later in the United States. Yet these facets of his biography — grand opera composer of interwar Europe and elder statesman of Hollywood — are often treated like separate halves of an exile artist’s life.

If the connection between the early moments of “Heliane” and Korngold’s later work in film was clear on Friday, that was in part because of how his music is being presented at Bard SummerScape. In addition to “Heliane,” which continues through Aug. 4, Bard is taking a two-week deep dive into Korngold’s broader catalog as well (through Aug. 18). Tying the programs together is a new collection of scholarship, “Korngold and His World.”

“This is a complete discovery for all of us,” Mr. Botstein said in an interview before the Friday performance. “The whole idea: Where does this film music come from, and how did he put it together? And why did he succeed like no one else?”


In addition to conducting “Heliane,” Mr. Botstein is a contributor to “Korngold and His World,” with an essay taking stock of a common charge against Korngold by critics like Theodor Adorno and Hanns Eisler: that by writing film scores, Korngold had made music subservient to the moving image.


Mr. Botstein duly admits, in his essay, that Korngold struggled to repurpose music from his films for stand-alone scores (though he says the 1950s Symphony in F sharp is Korngold’s “most successful transfer” back into the concert hall). But he also disagrees with Eisler and Adorno, who, he writes, “were wrong that the music in Korngold’s films was not meant to be heard.”

“The music actually was heard,” he adds, “but as an integral part of the film experience.”

Recently, while watching a succession of films scored by Korngold, I found myself in broad agreement with Mr. Botstein’s take. Korngold’s imaginative imprint is all over otherwise strong, though not quite brilliant, Warner Bros. movies like the noirish “Deception” and the melodrama “The Constant Nymph.”

Not surprisingly, both of those films feature fictional composers and performers in their narratives — opportunities that Korngold often seized to dramatize his own feeling that modernism without melody is ruinous. (In the interview, Mr. Botstein said, “If you want to get under the skin of Korngold, what he thought he was doing, ‘The Constant Nymph’ is the thing to watch.”)

But, despite Korngold’s distaste for the 12-tone music favored by modernists, he was not averse to experimental touches. In my favorite of his film scores — for “Between Two Worlds,” a wartime movie with touches of a morality play and a thriller — Korngold provides the material for a multimedia approach to leitmotif: As the scholar Ben Winters points out in “Korngold and His World,” a piano solo played by one character also appears in a version for a jazz-tinged ensemble, heard through a phonograph.

“That’s a very unusual score,” Mr. Botstein said. “There’s something postmodern in it.”

Bard isn’t the only place where you can see “Heliane” this summer. Naxos recently released a DVD and Blu-ray from a production of it by the Deutsche Oper in Berlin. That staging takes a more sedate approach to the political violence of the story, and offers Heliane a way out at the end.

At Bard, Christian Räth’s production is more literal, with a clearer broadcasting of the libretto’s dated obsessions, like sexual purity and the eternal feminine. But, for an opera not seen in this country until now, the staging is valuably crisp, the singing solid. Even though Korngold’s most enduring legacy may be in film, his take on 1920s Viennese opera is well worth a trip to take in.

“What you learn from ‘Heliane’ is that his particular, very distinctive melodic and harmonic language was there already before he went to Hollywood,” Mr. Botstein said. “There is something naïvely optimistic about his music, subconsciously beautiful. And winningly so.”

My own personal favorite of Korngold's operas is Die tote Stadt, from which the duet for soprano and tenor (Gluck das mir verblieb....) and the aria for baritone are both fascinating and quite beautiful. Erich Leinsdorf recorded the work with Carol Neblett and Hermann Prey with tenor Rene Kollo in a fabulous reading for RCA; it's been on my stereo every year since it first appeared on LP. 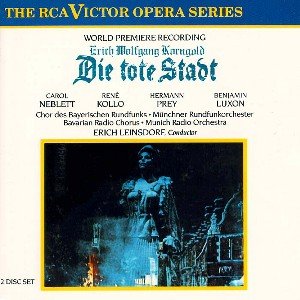 Yes to the Leinsdorf. I wore out my 8-track of highlites from that opera by playing it nonstop in my car. Great recording. I wish Sony would reissue Leinsdorf's mono Rochester and pre-Szell Cleveland recordings. They are also excellent.
Top

Did you see New York City Opera's marvelous production of "Die tote Stadt"? I did, more than once. The original cast in 1975 was Carol Neblett, John Alexander and Dominic Cossa, staged by Frank Corsaro and conducted by Imre Pallo. Pierrots Tanzlied ("Mein Sehnen, mein Wähnen") used to be a frequent audition number for a baritone in vocal competitions and maybe it still is.

Die tote Stadt is the only Korngold opera I have heard. I'd like to see this one, and look forward to hearing what you thought, Len.
Top

I adore Korngold's film music and know little of his other concert work. This is the work of an assured composer and deft hand, to be sure:

Compare that to this far less imaginative response by way of a transition from Ernest Gold: at 1:00 to 1:06. (After that, pure Herbert Stothart and Max Steiner - with traces of Herrmann's 'North by Northwest'!!! Quite retro for a film made in 1965.)

Barney we didn't know of die tote stadt but saw it at nyco-wonderful! We have high hopes for this one tomorrow! Len from hyde park
Top

I forgot to mention the biggest influence Korngold had on film music- John Williams.
Top

John F wrote: ↑
Tue Jul 30, 2019 4:36 pm
Did you see New York City Opera's marvelous production of "Die tote Stadt"? I did, more than once. The original cast in 1975 was Carol Neblett, John Alexander and Dominic Cossa, staged by Frank Corsaro and conducted by Imre Pallo. Pierrots Tanzlied ("Mein Sehnen, mein Wähnen") used to be a frequent audition number for a baritone in vocal competitions and maybe it still is.

Sadly, in 1975 I was out of work and couldn't afford the tickets. One of life's great missed opportunities!