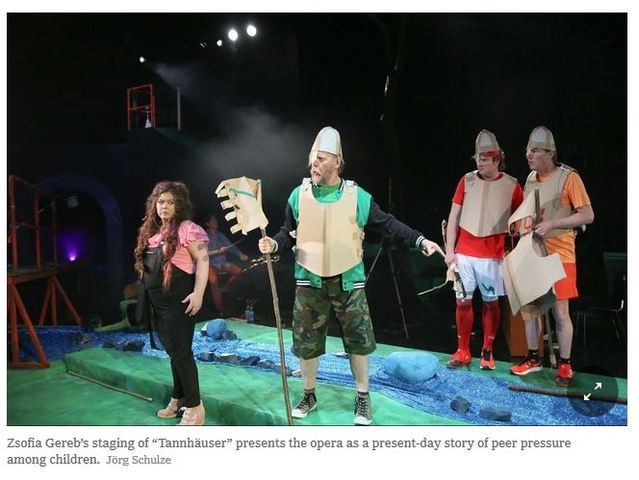 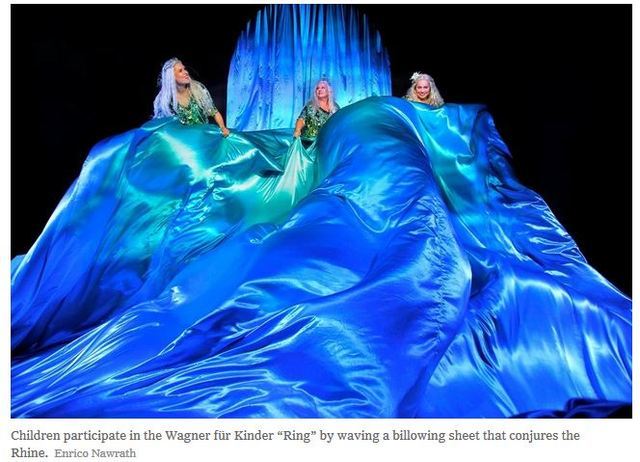 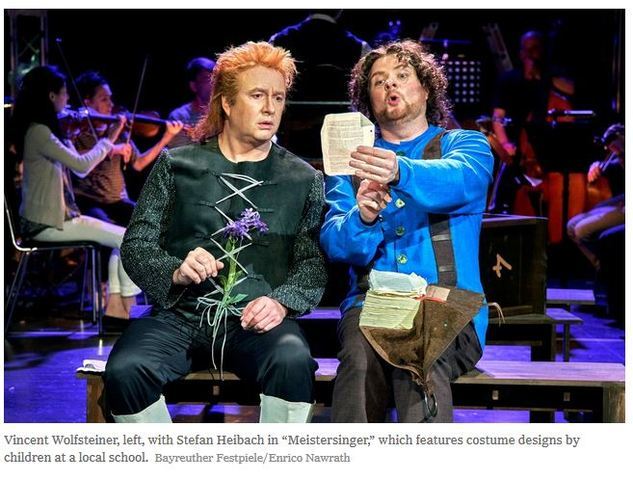 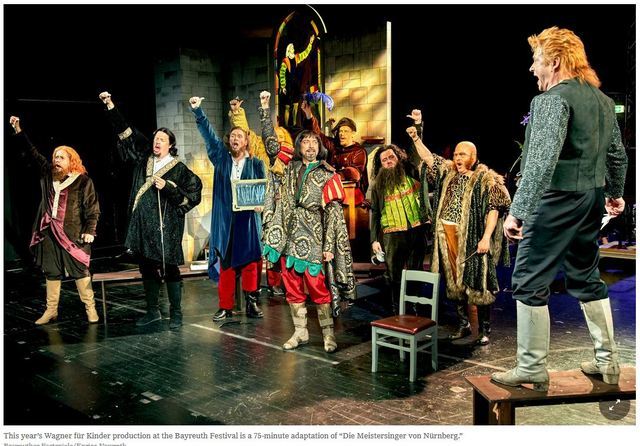 BAYREUTH, Germany — I received more than a few suspicious looks on a recent Friday morning as I waited in line for a performance of Wagner’s “Die Meistersinger von Nürnberg” here.

Maybe it’s because I was the only adult.

The only adult, at least, who wasn’t a chaperone for one of the large group of children eager for the doors to open at a rehearsal stage tucked behind the Bayreuth Festival Theater. One parent, holding the hand of a girl in lederhosen, squinted at my notebook, as if confused not only by my presence but also by why I was taking a show designed for kids so seriously.

But the colorful 75-minute adaptation of “Meistersinger” — presented by the Bayreuth Festival as this year’s edition of Wagner für Kinder, an ongoing series of productions of the composer’s operas made for children — was well worth taking seriously. Ostensibly designed for audiences between the ages of 8 and 12, this would have been an ideal entry point for a newcomer or a fresh perspective for a seasoned fan. (Alas, adults aren’t allowed unless they’re chaperones — or journalists.)

Die-hard Wagnerians may bristle at the thought of the master’s notoriously sprawling operas reduced to roughly an hour — in the case of the mighty “Ring” cycle, 15 hours of the original are delivered in a tight two. But the productions I saw, in Bayreuth and on DVD, were lucid and loyal, taking liberties yet revealing the kinds of universal truths you can only find in fairy tales and fables.

Walking into “Meistersinger,” I was as skeptical of Wagner für Kinder as the parents were of me. After all, how could a children’s version reckon, as all directors today must, with the final scene’s disturbingly nationalistic turn, in which Hans Sachs instructs the company to “honor your German masters” so that, even if the country were to decay under “false, foreign rule,” holy German art would remain?

For that matter, how could the intricacies and ambiguities of Wagner’s other works be translated to a young audience: the Schopenhauerian fever dreams of “Tristan und Isolde”; the tension of the sacred and profane in “Tannhäuser”; the sheer scale of the “Ring,” whose themes are as dense and extensive as its World Ash Tree?

Wagner für Kinder productions tend to concede complexity in favor of a single, central meaning and plotline. So, where Barrie Kosky’s “Meistersinger” at the Festival Theater interrogates Wagner’s life in Bayreuth and how his art became ensnared in the rhetoric of Nazi Germany, ending with Hans Sachs — presented as a Wagner double — giving testimony at the Nuremberg trials, the children’s version retains only a portion of that problematic finale, focusing on the opera’s love story.


“When you’re a young director, you want to put all your ideas into it, but then you realize no one will get it and children will get bored,” Dirk Girschik, who staged the production, said in an interview. “So we’re telling a fairy tale.”

That the children’s “Meistersinger” will be a lighthearted romance is clear from the start: Ivan Ivanov’s storybook sets have the look of a high school musical, and the costumes, based on the winning drawings from a contest among students at a local school, are fit for a Renaissance fair.

Mr. Girschik and Marko Zdralek, who adapted Wagner’s score, began their work on the production with a rough cut made by Katharina Wagner, the composer’s great-granddaughter and the director of the Bayreuth Festival, who founded Wagner für Kinder a decade ago. But it was two and a half hours long, so they trimmed it further based on what, they said, was essential: In addition to Walther and Eva’s romance, that included Wagner’s moral about the need for art to evolve.

While editing the plot, and occasionally speeding up scenes with spoken dialogue, Mr. Girschik added interactive touches for the children, such as having the apprentice David — the charismatic and soothing tenor Stefan Heibach, a Wagner für Kinder regular — teach the audience to harmonize on the line “Wacht auf” (“Wake up”). And, in the final scene, the children are asked who could sing better than Beckmesser. (The answer, of course, is Walther, though at one performance, a boy shouted, “Me!”)

Even with a smaller ensemble, Mr. Zdralek’s arrangement manages to make the fanfare-like overture no less grand than in its original form. It helps that the production takes place in what amounts to a black box theater, with musicians and singers sharing the stage. (That didn’t stop anyone from holding back; Wagner from a short distance should come with ear plugs.) But even in quieter moments, the score didn’t seem compromised by, for example, a group of woodwinds persuasively standing in for an organ.

What I didn’t realize until later is that this “Meistersinger” is tame — even a little conservative — compared with other Wagner für Kinder productions.

Last year, even, the festival presented a two-act “Ring” that could have worked on any professional stage. Directed by David Merz, and arranged by Mr. Zdralek, its sole set piece is a cabinet — covered in a painting of the World Ash Tree’s winding branches — with throbbing doors, its contents ready to burst out with the epic tale.

When the doors do open, the three Rhinemaidens let out a billowing sheet that, with the help of children in the front row, ripples to conjure the churning Rhine, which Alberich crosses to steal their gold and forge the ring. The audience later participates again by being asked whether Wotan should give that ring to the giants Fasolt and Fafner. (Imagine what would happen if they said no!)

With a running time of two hours, this “Ring” has little room to breathe, yet it’s efficient in both conveying the essentials of the story and offering an education in Wagner’s leitmotifs. Even when characters sprint through spoken dialogue, they leap back into the score whenever an important musical theme is introduced, or revisited with new meaning.

A breakneck pace, however, is only possible by sacrificing characters like Donner and Froh, Gunther and Gutrune. Gone, too, are about four hours of “Götterdämmerung.” Siegmund and Sieglinde, the incestuous lovers of “Die Walküre,” are never described as brother and sister; here, Brünnhilde wants to save Siegmund because, she says, he is her brother (which is technically true).

At the end of this “Götterdämmerung,” Brünnhilde doesn’t destroy the ring; she simply takes it from a sleeping Hagen (who killed Siegfried for it) and returns it to the Rhinemaidens. This is a gentle ending for a “Ring” with barely a body count — but then, as the cabinet doors close on the Rhinemaidens waving their treasure, Alberich, too, steps inside. In a bleak send-off for the children, Mr. Merz’s production suggests that the greed at the heart of the “Ring” is a cycle, indeed.


I suspect, though, that children have connected most with the Wagner für Kinder “Tannhäuser” of 2017. It’s not an opera that would seem to lend itself to young audiences, with its story of a medieval troubadour who, having had a taste of a lustful life in the realm of Venus, is banished by his fellow knights and sent to seek forgiveness from the pope in Rome. But, if the Bayreuth Festival’s new production by Tobias Kratzer — an inventively updated telling presented as a virtually new story about the nature of art — is any indication, “Tannhäuser” is more malleable than it’s sometimes been treated.

Zsofia Gereb’s Wagner für Kinder staging — with an impressively versatile set, wrapped around the orchestra, by Jule Saworski — rivals Mr. Kratzer’s in its ingenuity. Tannhäuser, in her revelatory read of the opera, is torn between dangerous new adventures with Venus and the more conventionally boyish playtime he has always known with his group of friends. He thinks there may be room for both; peer pressure would say otherwise. What child hasn’t experienced this?

The singing contest of Act II, in which Tannhäuser’s profane desires are revealed and his beloved Elisabeth shields him from retribution and sets him on his way to Rome, is presented here as a flippant game of make-believe among friends: a singing contest in which the prize, little Elisabeth says, is her hand in marriage.

Tannhäuser, nicknamed Tanni, sings about Venus and is immediately ostracized by the other boys; his confession even gets him punished by adults. But Elisabeth saves him by pleading for their forgiveness — in the form of her Act III prayer, which survives in Mr. Zdralek’s musical adaptation, while nearly the entire overture, Pilgrim’s Chorus and “Song to the Evening Star” do not.

The tragedy of “Tannhäuser,” traditionally, is that his redemption comes at the cost of Elisabeth’s life, as well as his own. Ms. Gereb, however, offers us a world in which forgiveness can come with a happy ending, at last.

Users browsing this forum: No registered users and 110 guests