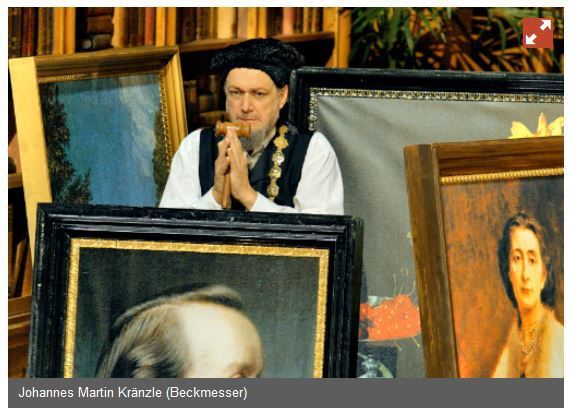 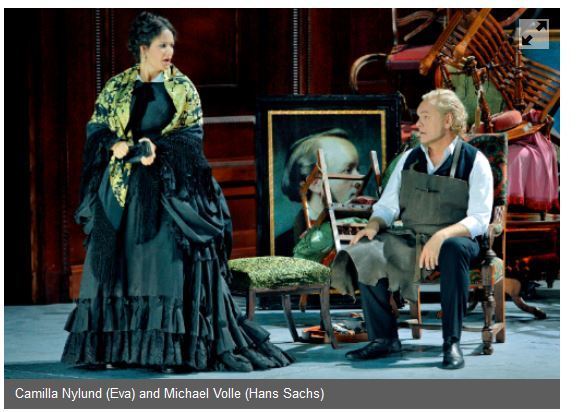 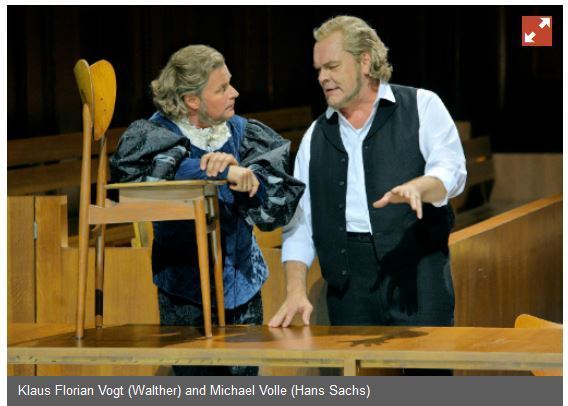 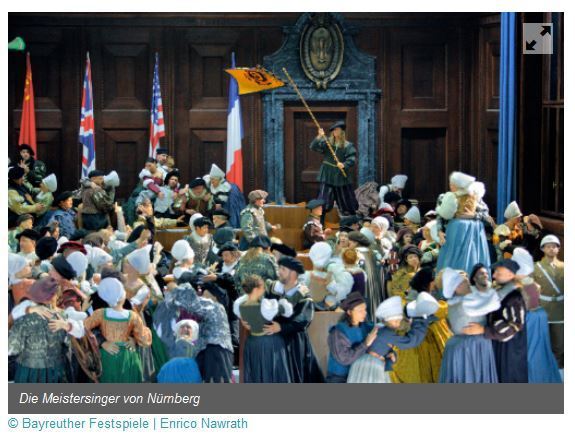 It’s not every day that one has a chance to witness Franz Liszt and Richard Wagner playing four-hand piano together. Yet, this is precisely what the audience experiences during the Prelude to Die Meistersinger von Nürnberg in Barrie Kosky’s meticulously prepared production for the Bayreuth Festival. The specifics for this splendid party are offered on a screen, such as the date (13th August 1875), the venue (Wahnfried, Wagner’s luxurious Bayreuth home), and include even the names of Wagner’s dogs and the outside temperature.


Whether such a party ever took place is immaterial. The colourful, busy gathering (Rebecca Ringst’s set and Klaus Bruns’s costumes are excellent) is captivating, with Liszt’s daughter (and Wagner’s wife), Cosima, sharing gossip and coffee with the brilliant conductor Hermann Levi (later to conduct the premiere of Parsifal), maids in attendance, presents of perfumes, soft silk and a painting being opened, and Wagner look-alikes one after the other coming out from – where else? – the inside of the piano. A subtle autobiographical hint here: the young David, the handsome Walther and the matured, wise Hans Sachs are all alter egos of the composer at various stages of his life.

In front of our eyes, the protagonists of the party become the main characters of the opera. The host, Wagner, remains as himself for a long time, observing the events, before switching to Hans Sachs halfway through the act. Liszt later returns as Pogner, Cosima seamlessly becomes Eva by the time the Prelude finishes and the Jewish Levi is transformed into Beckmesser, the marker. His “otherness” is made plainly clear, when during the opening chorale, he refuses to kneel down or stand up with the believers.

Wahnfried continues to be the background until the very end of Act 1, when the first directorial bolt of lightning strikes. While the members of the guild quarrel, the scenery is slowly moved backstage and, with the smoothest of set changes, we find ourselves in modern Nuremberg, at the Palace of Justice where in 1945 the International Military Tribunal did its work. Sachs/Wagner slowly steps off the disappearing Wahnfried set and steps on to the stand. Is Wagner on trial?

From this point on, Courtroom 600 will remain the uneasy background of the opera. When Kosky's production was new, Act 2 had at least a green meadow laid between the walls, giving a credible impression of night in the medieval city. This has now changed. The floor is bare and Wahnfried’s elegant furniture is roughly thrown together in a pile. The fairy tale may proceed, but it is now incongruously mismatched with the scenery. At the end of this act, the usual comic and haphazard running around of a city awoken from its slumber turns into a skin crawling pogrom, as David and his apprentice friends chase and beat up the hapless Beckmesser, who now wears an oversized, horrid Jewish caricature head. Its equally bizarre, much larger twin is gradually inflated like a giant balloon and, while floating, it stares at the audience with its ugly, scary eyes. Thus Act 2 finishes. Are we all on trial?


The final act offers some – but not all – of the answers. After the singing contest, when the victorious Walther wants to reject the offer to become a member of the guild, Sachs turns away from him and addresses not Walther, but the audience with his famous final speech. This soliloquy has been much abused by the Third Reich through its emphasis on “real German art”. However, Sachs telling us, the audience, what is German and true (“…was deutsch und echt”) appears to be a plea for Wagner’s acquittal. Finally he turns back and conducts the grandiose final pages to an “orchestra” consisting of the members of the chorus.


The cast consists of mostly the same singers, who contributed so much to the success of this production in the last two years. Michael Volle made the part of Hans Sachs completely his own, with humanity, humour and beautiful vocal elocution. Klaus Florian Vogt seemed to struggle with some of the high Gs and As in the first act, but sang warmly and flawlessly afterwards. Johannes Martin Kränzle not only sang but acted Beckmesser’s part superbly and as Pogner, Günther Groissböck’s sonorous bass was impeccable. The rest of the mastersingers and Daniel Behle’s David were equally enjoyable. Camilla Nylund (who also performs Elsa in Lohengrin this year) is the third soprano to sing Eva in so many years; both she and Wiebke Lehmkuhl (Magdalena) proved themselves to be worthy in a predominantly male cast. The chorus was reliable as ever, although in the large ensemble scenes, stage and orchestra were not always meticulously together. Under Philippe Jordan’s direction, the orchestra supported the singers with many colours and well-judged tempos. The instrumental introduction to Act 3 was, in particular, heartfelt and expressive.

Seems like Philippe Jordan is gaining some cred as a young Wagner conductor......His Walkure will be broadcast this afternoon here in NYC: we'll see.
Top

maestrob wrote: ↑
Sun Aug 11, 2019 9:48 am
Seems like Philippe Jordan is gaining some cred as a young Wagner conductor......His Walkure will be broadcast this afternoon here in NYC: we'll see.

Brian the NY Times reviewed it in March of this year-only 1 sentence devoted to Jordan. Regards, Len 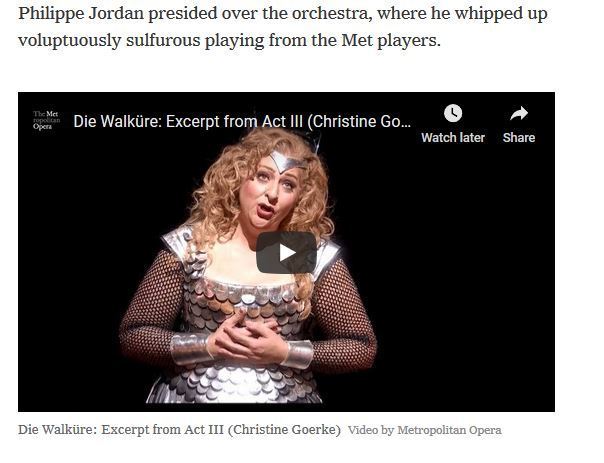