This overplayed classic felt fresh in the star conductor’s return to the New York Philharmonic after 11 years.

Though Dvorak’s stirring, tuneful “New World” Symphony is justly popular, it tops my list of works that are heard too often for their own good. Perhaps my attitude comes in part from overkill during college: The instructor of a gym class I took played excerpts during exercise sessions. Even today, when I’m at a performance and the stern, pulsing third movement begins, I feel like I should be in the aisle doing jumping jacks.

So all credit to Gustavo Dudamel, who led the New York Philharmonic in a fresh, insightful and exciting performance of the work at David Geffen Hall on Wednesday. This varied program opened with Ives and included the New York premiere of a colorfully eclectic piano concerto by Esteban Benzecry. Yet Dvorak’s war horse was the unexpected highlight.

This was Mr. Dudamel’s first appearance with the Philharmonic in 11 years. He has been busy elsewhere, of course — mainly as the visionary music director of the Los Angeles Philharmonic. (That orchestra announced on Wednesday that his contract was being extended through the 2025-26 season, his 17th there.)

But New York is making the most of his return: This was the first of two programs he is leading, over two weeks. The hall was packed.

In the Dvorak, Mr. Dudamel jolted the familiar score with vitality and imagination. Yet the performance stood out just as much for the subtlety, restraint and even gravity he brought out. There was a touch of elusiveness in the way he shaped the slow introduction to the first movement. Once the main Allegro section started, with the assertive minor-mode main theme, the music had engrossing ambiguity, the mood both rousing and unsettling. The emphatic execution of small details made a big difference, as in the way the orchestra would hold the final note of a rising phrase for its full value, with unwavering sound.

When the Allegro turned reflective, in the elegiac second theme, the rich, dark sound of the Philharmonic turned warm and sunny. When themes returned, Mr. Dudamel often took a slightly altered approach, drawing out a phrase more expressively or pressing a crescendo more forcefully. He has long been an admirably intuitive musician, willing to respond in the moment, and the final charge to the brassy, vehement conclusion of the movement was thrilling.

The brass chorale that opens the slow movement was grim and resounding, rather than majestic, which set up the poignantly sweet main theme, Dvorak’s evocation of an American spiritual, to be all the more affecting. This melody is first heard on English horn, and Ryan Roberts played it beautifully. The bucolic middle section of the movement was vividly rendered, with rustling strings and woodwinds conjuring twittering birds.

In the scherzo, the performance shifted deftly, from stretches of somber, driving intensity to passages of lightness and grace. The finale charged forward fearlessly. Yet there were also moments of Brahmsian grandeur.

The program opened with an effectively hushed account of Ives’s “The Unanswered Question,” which introduced themes of timelessness and mysticism that were then taken up in Mr. Benzecry’s piano concerto, “Universos Infinitos.” This composer grew up in Argentina but has lived in Paris since the late 1990s. Mr. Dudamel and the soloist, the pianist Sergio Tiempo (making his Philharmonic debut), gave the premiere of this kinetic, three-movement, half-hour work in the fall in Los Angeles.

Mr. Benzecry’s program note covers lots of ground. The piece has to do “with humans and their connections with their internal and external universes,” he writes, “in a world before our civilization” that was governed by “planetary and agricultural cycles.”

The music itself was colorfully orchestrated, restless and likable — if a little generic and, for all its tumultuousness, thin. The first movement is run though with an assertive four-note theme, like a somber fanfare. I heard echoes of Prokofiev and Messiaen in the piano part, full of pounding rhythms, cascading chords, spiraling swirls of fast notes, and that four-note theme, played in every contortion. The mercurial, mysterious slow movement was the strongest music, with intriguing cluster chords in the piano and shimmering, eerie orchestra sonorities. The finale is a dizzying perpetual-motion toccata. Mr. Tiempo gave a scintillating and virtuosic performance.

Hearing this new piece certainly helped me hear the “New World” Symphony afresh. But it was Mr. Dudamel’s probing, exuberant performance of the Dvorak that really accomplished that. At the end, when the lingering final chord trailed off into silence, the audience was reluctant to break the mood with applause. How often does that happen at a “New World” performance?
Top

I've had my differences with him in the past, most notably in Mahler. His debut concert in L. A. featured a rather odd Mahler I that was telecast, and recently there was an oddly distorted Mahler II (especially the first movement, which was overall too slow) that was posted here on CMG. Other than that, I've seen a remarkably fluent Verdi Requiem from the Hollywood Bowl where Dudamel led without a baton, and a very good New Year's concert in Vienna. I've heard several CDs too that impressed me as OK. I hope to hear more from him.
Top

I, too, have had my differences with Dudamel in the past. However, I generally trust Tommasini, and this sounds encouraging. I really would like to see him record some of Benzecry's work, virtually none of which is available (he did some with the Los Angeles Philharmonic).
Top

Modernistfan wrote: ↑
Fri Jan 17, 2020 4:12 pm
I, too, have had my differences with Dudamel in the past. However, I generally trust Tommasini, and this sounds encouraging. I really would like to see him record some of Benzecry's work, virtually none of which is available (he did some with the Los Angeles Philharmonic).

Agreed! I, too, would like to hear this.
Top

It's great to have some charismatic musicians who reach into the wider world. Dudamel certainly does that.
Top

I saw on the web that Naxos is supposed to release a recording of orchestral music by Esteban Benzecry shortly. I do not know the contents, the release date, or the orchestra (it might be Sao Paolo, which has been recording for Naxos). I shall keep you posted when I get any further information.
Top

Modernistfan wrote: ↑
Sun Jan 19, 2020 10:25 am
I saw on the web that Naxos is supposed to release a recording of orchestral music by Esteban Benzecry shortly. I do not know the contents, the release date, or the orchestra (it might be Sao Paolo, which has been recording for Naxos). I shall keep you posted when I get any further information.

Count me a bit skeptical of this review. If there are 100 recordings of the 'New World', I'm sure 50 of them are great. No one is going to top Fritz Reiner's recording made in 1957, are they?
Top

I have the George Szell box, still in plastic. One day I will find out. I no longer buy large boxes, or very many CDs for that matter.
Top

Szell made recordings of the three last Dvorak symphonies in the middle 1960's that I have admired since then. They were released on a 2-CD set about 25 years ago, and I play them about once/year. Highly recommended that you tear into that Szell box and enjoy! 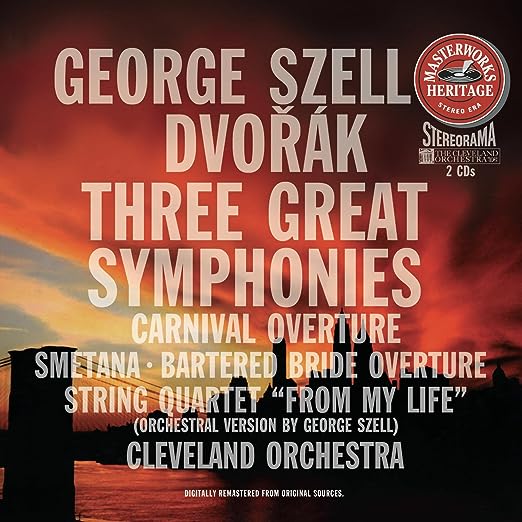