We loved the opera-even this updated version couldn't ruin the experience! The music was just beautiful-so delicate in parts! $3.99 to view-it had captions! Regards, Len

Here's someone who wrote a review of it.

This production by Plamen Kartaloff - who also supervised the video direction - bears testimony to ‘concept opera’ having now reached Bulgaria. The opening Act is set in a public square, which is here surrounded by skyscraper office blocks. The action is clearly updated to the late twentieth century, despite the evident absurdity when Juan, dressed in a business suit and tie, conveniently happens to have a sword on his person with which to fight a duel with the hero. Dulcinea, dressed in a black leather basque, first arrives in an open-topped red car. A flying horse, presumably intended to represent the Don’s romantic dreams, drifts in and out, suspended on very obviously visible wires. The bandits in Act Three appear to have their headquarters in a Las Vegas-style casino complete with roulette wheels and fruit machines. At the end the Don does not die; instead he stands surrounded by heavenly radiance, triumphant rather than disappointed. This simply adds an unwanted layer of cloying religiosity to an already dangerously sentimental scene.

So it goes on - it is not necessary to labour the point. A unit set throughout, consisting of a cruciform platform extending across the stage, serves principally to restrict the movement of the singers. This is the type of production which many viewers would prefer to watch with their eyes firmly shut. Those who have problems with strobe lighting will in any event have to look away during the scene with the industrial turbines which stand in for windmills.

All this might perhaps be acceptable if the performance were exceptional, but unfortunately that is not the case here. There has been a tradition for the title role to be performed by Slavonic basses ever since Chaliapin gave the première in Monte Carlo; but Chaliapin was brought up in tsarist Russia in the days when French was the standard language of polite society. More recently the Bulgarian, Nicolai Ghiaurov made one of the two standard reference recordings of the opera on CD, so Orlin Anastasov here is most definitely following in the same tradition. Although he has a beautifully rounded and indeed heroic bass voice, his French never sounds idiomatic. Tsveta Sarambelieva as his beloved has one of those deep contralto-ish Slavonic mezzos which has plenty of body but little of the lightness of touch that singers such as Régine Crespin brought to the role. Those who recall Elena Obraztsova’s similarly unidiomatic Charlotte in the Domingo recording of Werther will have some idea of what to expect. In order to provide contrast, it is necessary that the Sancho Panza should have a lighter and more baritonal voice than his deeper-voiced master. Here Ventseslav Anastasov brings a bass resonance which sounds very similar indeed to the Don - are the singers related?

The orchestral playing under Francesco Rosa - the only non-Bulgarian involved - is lively enough but sounds rather recessed, as does the chorus. The woodwind playing is not always well tuned, as for example at the beginning of Don Quichotte’s serenade in Act One. The recording is taken from a single performance only, so such mishaps are perhaps inevitable. At a number of points one notes that the cor anglais player is singularly inexpressive, and the orchestra sounds as though it could have done with some additional desks of lower strings.

A prominent role is assigned to the ballet - one of the reasons that the chorus is relegated to the background - but their contributions are not noticeably Spanish or even French in idiom except in a horrible imprecise interpolated tap flamenco number in Act Four. Massenet most inconsiderately neglected to supply any music for this, simply because he wasn’t expecting a ballet at this point. One might have welcomed a note in the booklet from the producer explaining his interpretation of the opera - why, for example, do the chorus walk around with their heads in picture frames? - but we are not given any information about this, merely a background note on the origins of the work and a brief synopsis. The audience at several points interrupts the music during the Acts with applause.

Reviewing the Kirov CDs of Don Quichotte last year in Opera magazine, Rodney Milnes lamented that “perhaps the composer’s greatest strength was his word setting, and the opportunities this offers to imaginative French stylists - of whom there are none in this cast, imaginative or otherwise.” Unfortunately the same observations apply here, and despite some excellent voices singing conscientiously and intelligently, the essential Mediterranean atmosphere of the score is conspicuously missing. The result is to make one suspect the worth of the work itself, and to compare it unfavourably with Kienzl’s massive opera on the same subject produced a decade earlier. This would be unfair to Massenet, who only sought to investigate part of the character of the Don as imagined by Cervantes.

There are two other DVD versions of this opera, of which I have viewed excerpts available on YouTube. The one from the Monnaie in Brussels, with a French-speaking cast headed by José van Dam, is similarly updated but appears to have a more authentic sense of musical style. The Trieste DVD with Cesare Ruta is also updated, and the casting is not such as to inspire confidence. A recording from the Paris Opéra in 2000 with Samuel Ramey would seem to be the best bet for a video version, but unfortunately this appears never to have been commercially available although the whole telecast is available on YouTube in rather fuzzy vision and with subtitles in French only. Is there any chance of a DVD release of this performance?

I admire Don Quichotte in the CD version with Jose Van Dam. His voice is just right for the role, IMHO, his French impeccable, and his musical intelligence shines through the inflection of every note. Let your imagination provide the sets and costumes. 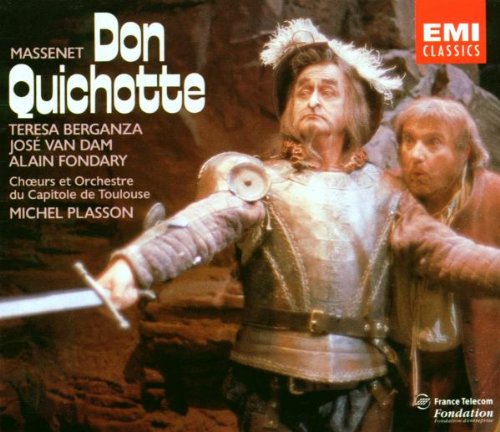 Brian I'm sure he would have been better-we've only seen him a few times over the years-maybe only once-Pelleas? As for using your imagination I want both a full productions and English surtitles. Regards, Len
Top
Post Reply
3 posts • Page 1 of 1