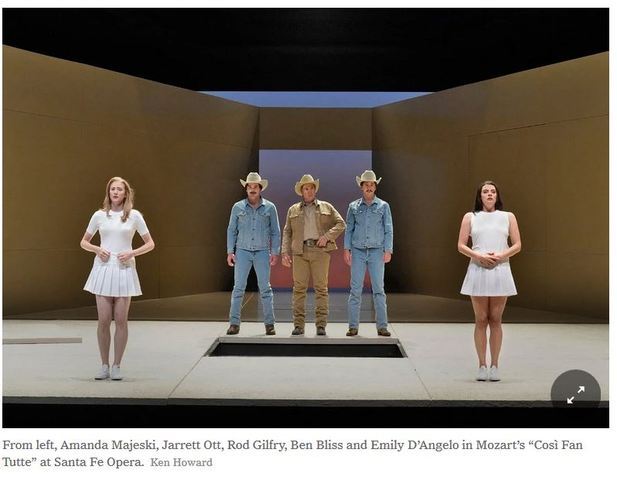 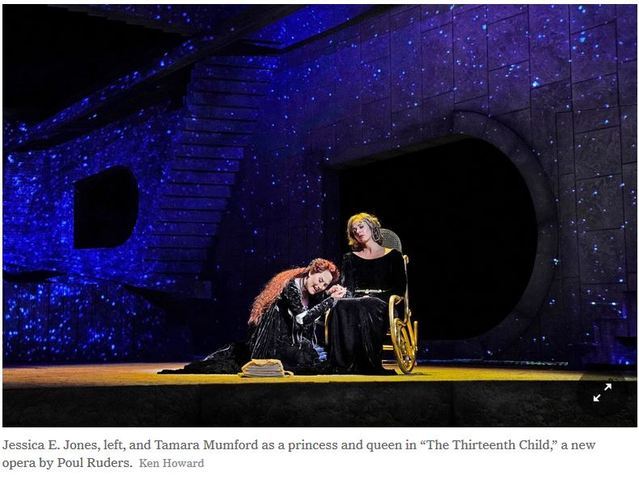 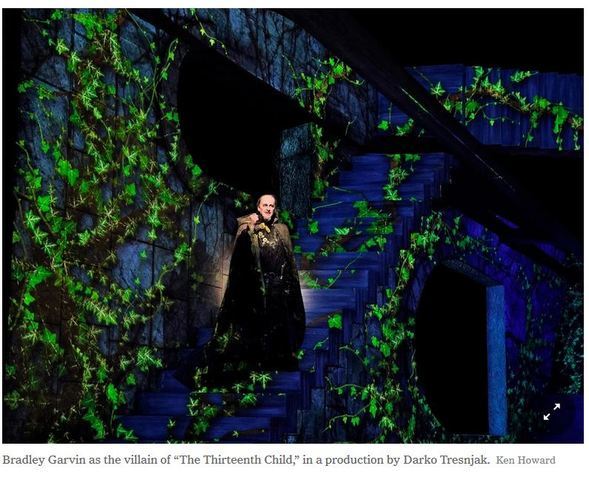 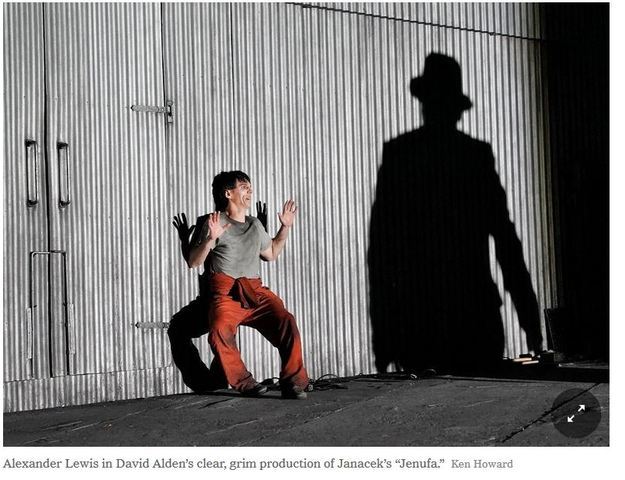 At Santa Fe Opera, Extreme Weather Is Part of the Show

SANTA FE, N.M. — What unifies the deeply dissimilar operas playing this year at Santa Fe Opera? In a word, the wind — a fixture in the librettos, as well as in the weather.

Open on the sides and perched on a hill here, the company’s theater lets in the elements in a way that makes you hear classic passages in sometimes unexpected ways. In Mozart’s “Così Fan Tutte” on Friday, the sublimely serene first-act trio, “Soave sia il vento” (“May the wind be gentle”), couldn’t calm a pummeling downpour or gusts strong enough to waft rain onto the audience.

On Wednesday, booming desert thunder seemed written into the tense score of Janacek’s “Jenufa”; the draft that throws open a window at the frantic close of Act II might well have been real. “The icy hand of death,” the agonized Kostelnicka calls it, “tearing at my heart.”

It’s much the same for a character in Poul Ruders’s “The Thirteenth Child,” which had its premiere here on Saturday: “The wind,” he sings, “shrieks and rips my soul.”


As it happens, the weather that evening was as settled as it had been all week. There was no shrieking or ripping coming from the heavens — and very little coming from the stage, where “The Thirteenth Child” made a mild-mannered impression.


Mr. Ruders is best known for his blistering 2000 adaptation of Margaret Atwood’s dystopian novel “The Handmaid’s Tale.” That opera has ferocious focus and persuasive depth, but his other stage works have been vaguer — occasions for some elegantly impassioned music that manages only to sketch its characters’ trials and tribulations.


“The Thirteenth Child” is no exception. Based on one of the more obscure tales of the Grimm brothers, it tells the story of the Lear-like King Hjarne, fallen under the malign influence of his cousin Drokan, who’s in love with the queen, Gertrude. Increasingly paranoid, Hjarne becomes convinced that his 12 young sons are conspiring against him.

So Gertrude secretly sends the boys away to grow up in the forest. When both parents die, it’s the job of Princess Lyra, the youngest child and only daughter, to find her brothers, restore peace, and — of course — marry a prince.

There’s domestic violence, some business about red lilies, an unintended spell, a ghost and a bonfire pyre. But through two 40-minute acts that feel simultaneously overstuffed and abrupt, it all doesn’t add up to much. Pleasant enough company — Darko Tresnjak’s colorful staging keeps the plot moving at a clip — “The Thirteenth Child” offers, for a fairy tale, precious little magic.

There are some artfully quiet choral passages — the Santa Fe ensemble, drawn from the company’s apprentice program, is, as ever, superb — and Mr. Ruders, whose music has in the past tended toward brooding, dense dissonance, here revels in a Romantic warmth that’s embraced by the conductor, Paul Daniel. Some melodies even have the soaring lyricism of a John Williams film score.

There are vocal effects — Hjarne, whose music lies sadistically low even for a bass, sometimes soars into falsetto to evoke his madness — but little vocal impact. We know what the characters are feeling — they tend to tell us too plainly — but we don’t feel it, too.

The scene of recognition between Lyra and her long-lost youngest sibling, Benjamin, a would-be emotional high point, passes in a flash. In a twist, Lyra is forced to remain mute for seven years if her brothers are to survive, but little is made of that intriguing turn, either in the music or the narrative. Lyra (the bright soprano Jessica E. Jones) and Gertrude (the mezzo-soprano Tamara Mumford, velvety but pressed too low by the score) come together in lush exchanges, but their bond doesn’t tug at the heart.


Contrast that with the scalding love and tension between the two women at the heart of “Jenufa”: the title character, secretly bearing a baby out of wedlock in a small town, and her stepmother, the Kostelnicka, who makes a brutal decision to save their family from disgrace.

In David Alden’s lucid, confidently grim production, updated from the 19th century to what seems like a gray village of the Soviet bloc, the sopranos Laura Wilde (as a Jenufa driven from tenderness to numbness) and Patricia Racette (a sympathetic, truly human Kostelnicka maddened by piety) square off in scenes of concentrated intensity.

The voices of this potent pair are not the largest or most sumptuous. But their conductor, Johannes Debus, kept the orchestral textures lean enough for them to project clearly. And while the ending’s redemption and reconciliation aren’t overplayed, they are given their full, honest due, and it’s stunning.

Reconciliation eludes the young couples at the end of R.B. Schlather’s chic yet quirky production of “Così,” conducted with silky alertness by Harry Bicket. The set is stark monochrome, and the milieu is abstractly 1970s: Don Alfonso is styled as a kind of weathered Marlboro Man, and the quartet of lovers start off in preppy tennis whites. When called upon to become soldiers, the men dress up as cowboys. (The mezzo-soprano Emily D’Angelo, her voice keen as a clarinet and her presence impulsive as Dorabella, is most memorable.)

There’s maybe a point here about the archetypal tensions between country-club East Coast and the Wild West. And perhaps they overlap; certainly both are sources of what we’ve come to call toxic masculinity. But Mr. Schlather focuses more overtly on whimsical physicality (lots of tumbling around) and winking metatheatricality, with characters beckoning spotlights and cuing the orchestra.

After gestures like these, though, the final scene sees the collapse of theatricality altogether. The characters huddle glumly near the front of the stage; Don Alfonso pours bottles of liquor over each lover, a bitter benediction, as his scheme is coolly revealed. Everyone just marches off in single file as the opera ends.

It was a painful exit, and this week brought news of another for this company: Alexander Neef, installed just last year as artistic director, was named the next leader of the Paris Opera.

The full impact of Mr. Neef’s brief tenure in Santa Fe remains to be seen, as his plans unfold in the coming years; the first production here of Wagner’s “Tristan und Isolde,” next summer, is a sign of bold ambitions. Hopefully the caliber of new operas will rise, too: In addition to Mr. Ruders’s merely polite piece, I’ve covered underwhelming first stagings of “Cold Mountain” and “The (R)evolution of Steve Jobs” here in recent years.

When it comes to premieres, Santa Fe Opera needs badly what a character in “The Thirteenth Child” calls “fierce winds of change.”

Thanks for this.I attended 2 there in the early 90's, before the ceiling was entirely closed in. From our cheaper seats one could view the stars and mountain tops, but we were also rained on both nights, sat in ponchos.Richard Strauss' " Die schweigsame Frau" ( "The Silent Woman" ), and Puccini's " La Funciulla del West ".Fortunately , the bar served red wine throughout the performance.
Top

We were out there many years ago and saw the stars-no rain but it was darn cold. Regards, Len
Top
Post Reply
3 posts • Page 1 of 1

Users browsing this forum: No registered users and 53 guests