What NEW discs/music are you adding to your collection?

It's funny, Joe, but Elektra is the one Strauss opera that I've never quite warmed to. I have Solti's version with Nilsson, and have seen various productions, one live and one on TV from the MET.

It's just bar after bar of ugly music, with a few minutes of acceptable solo music from the title role stuck in the middle.

No accounting for taste, I guess.

I used to have all three LPs that RCA issued in the Victory at Sea series, now available on CD. I well remember being fascinated with the many, many 1/2 hour chapters that were broadcast on TV during the 1950's. All 26 episodes were later issued on DVD and are still available. Still the best war documentary I've ever seen. 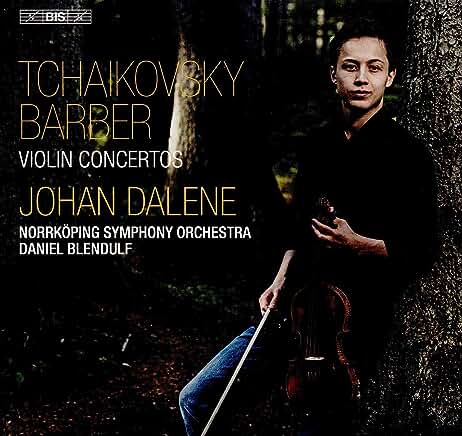 For many decades your reviewer has held on to Jascha Heifetz in his recording of the Tchaikovsky Violin Concerto with Fritz Reiner as the master interpreter of Tchaikovsky's brilliant Mt. Everest of Violin Concertos, even while many recordings by the following generations, many very impressive, have come my way. I've often criticized conductors for tampering with Tchaikovsky's tempos as many have slowed things down to accommodate difficult passages, or otherwise weakened the dramatic tension so necessary to Tchaikovsky's vision. Johan Dalene, in a stunning debut partnership with conductor Daniel Blendulf leading the Norrkoping Symphony Orchestra from Sweden (founded in 1912) is really the first recording I've heard that surpasses Heifetz in subtlety without losing any of the electric excitement so necessary to sustain the listener's interest. Both in the accompanying Barber Violin Concerto and in the Tchaikovsky (which, like many modern recordings, opens the cut in development in the overlong bridge before the "B" section of the first movement that Reiner saw fit to make), Dalene suffuses each work with new depths using subtle dynamic shifts and bowings that appropriately underline the music without ever being obtrusive or offensive in any way, while Maestro Blendulf, in his skillful preparation of the orchestra, echoes the sentiments in each bar. In passing, let me add that Johan Dalene has also just released a recital album of Scandinavian works for piano & violin that I must hear soon. The above outstanding recording in superb sound is surely a feast for the ears, and wins a rating of five enthusiastic gold stars from your reviewer.
Top This is Maestro Herreweghe's third recording of Bach's St. John Passion, and it clearly demonstrates his magnificent obsession with Bach's works. It is also, IMHO, the best of the three. Not having performed this work, I have not studied the score as deeply as the Christmas Oratorio or the B Minor Mass, but on first hearing I find Herreweghe's colorings in the accompaniment darker and more penetrating than in previous versions I have heard. Each bar reflects the agony in the text in a profound way, while his soloists convey the text clearly and with an air of mystery that permeates the entire performance. Of special interest to listeners would be counter-tenor Damien Guillon, while Maximilian Schmidt as the Evangelist and bass Kresimir Strazanc as Jesus excel in their roles. The Collegium Vocale Gent sing with a full yet gentle tone. This is a magnificent recording, and it fully deserves five stars.
Top
Post Reply
4353 posts