A freeze came in last night-no gardening for us-fortunately there was a free English captioned Libuse on youtube. A traditional and maybe a little on the minimal side but a very enjoyable production! The singing was very nice and we loved the music-yeah we could detect a little Wagner style! Regards, Len 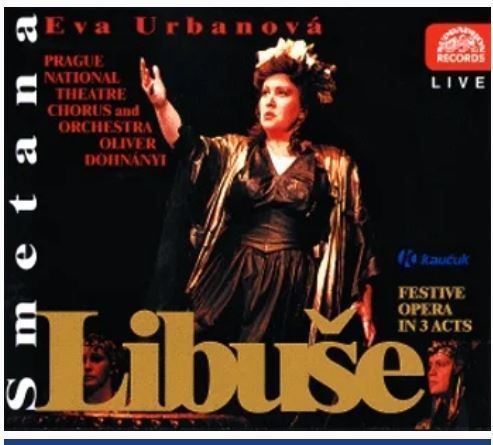 Here's a review from someone who saw it in 2002 but he mentions the one we saw.

'Libuše is not an opera of the old type, but a festive tableau, a form of musical and dramatic sustenance. I desire it to be used only for festivals which affect the whole Czech nation.' Smetana's view of his Libuše was unequivocal, and shows that the whole conception related to the occasion of its first performance: the inauguration of the National Theatre in 1881. How fitting then that this performance should have been recorded live in November 1983 on the theatre's reopening after a major refurbishment.

There has been another recording subsequently, again by National Theatre forces but with a different cast, under baton of Oliver Dohnanyi (Supraphon SU 3200-2). This was also recorded live, in May 1995, at a performance dedicated to the fiftieth anniversary of the end of the Second World War. As ever when comparing performances and recordings of major works, each version has aspects to commend it.

To get back to basics: Dohnanyi's tempi are quicker, and he takes 150 minutes to Kosler's 166. This is particularly important because it means two CDs instead of three. The recording sessions were also more flexible than the straight-through live performance by Kosler, and the stage noises are not present. On the other hand, the earlier version has the more atmospheric sound and also the stronger cast, though special praise is due to Eva Urbanova in the title role of the Dohnanyi version. Like Gabriela Benackova-Capov for Kosler, she is captured on splendid form.

The plot is relatively static, and based upon the legendary events which led to the founding of the first Bohemian dynasty. Libuše is the Queen of Bohemia, and when there is a dispute over the line of inheritance, she recommends that the people should decide. This effects a reconciliation to the delight of all, and in the final scene she prophesies the glory and eternal life of the Czech nation.

No wonder this opera is never performed on the international circuit. But the music is another matter, as the stirring opening scene shows, replete with magnificent fanfares (TRY CD1 1: 0.12). The score is subtle too, with thematic identification for the main characters, which allows the personalities of the drama to develop. There are some fine, noble tunes, to be sure, in particular those for the leading protagonists, Libuše herself and Premysl. A fine moment comes towards the end when they make their entrance together, and their two themes are magnificently combined (CD3 5: 0.00; but be warned, there is discrepancy between the booklet and CD3 as far as cue points are concerned).

Kosler knows and loves the music, and makes the most of its monumental style. His relatively slower tempi bring forth the grandeur and seriousness of the conception, and the ceremonial atmosphere is well captured by both the recording and the performance (Try the closing scene of Act 2 CD2 5: 0.00). The cast is splendid, reflecting that the extraordinary musical traditions of the Czech's (Europe's most musical nation?) are alive and well. The whole performance captures the sense of occasion which the reopening of the theatre must have been, and which links so closely to Smetana's original conception. True, the audience contributions are too frequent, in the form of both coughing and applause, and the stage noises are sometimes an irritation. But for the domestic listener too this opera is an occasional work, and the atmosphere of occasion is worth having preserved. Both recorded versions of the work will give pleasure, and while this reissue of the Kosler performance is by no means perfect, it does reach to the heart of the matter. Smetana emerges as the great opera composer he undoubtedly was.

Re: Our First Smetana Libuse

Looks interesting, Len, thanks. I'm a big Benackova fan, as she is a vastly underappreciated singer in the West since she performed rarely outside of Czechoslovakia. May I recommend her version of the Dvorak Requiem and also Rusalka?

Oliver Dohnanyi (b. 1955) is a new conductor for me, but he is a member of that famous musical family and related to Christophe von Dohnanyi (The "von" indicates some sort of German noble title, I suppose, although I've not researched it.), who led the Cleveland Orchestra for many seasons, so he's also related to the composer as well.


Christophe von Dohnányi was born in Berlin, Germany to Hans von Dohnanyi, a German jurist of Hungarian ancestry, and Christine Bonhoeffer. His uncle on his mother's side, and also his godfather, was Dietrich Bonhoeffer, a Lutheran pastor and theologian/ethicist. His grandfather was the pianist and composer Ernő Dohnányi, also known as Ernst von Dohnányi. His father, uncle and other family members participated in the German Resistance movement against Nazism, and were arrested and detained in several Nazi concentration camps before being executed in 1945, when Christoph was 15 years old.[1] Dohnányi's older brother is Klaus von Dohnanyi, a German politician and former mayor of Hamburg.[2]

Users browsing this forum: No registered users and 40 guests