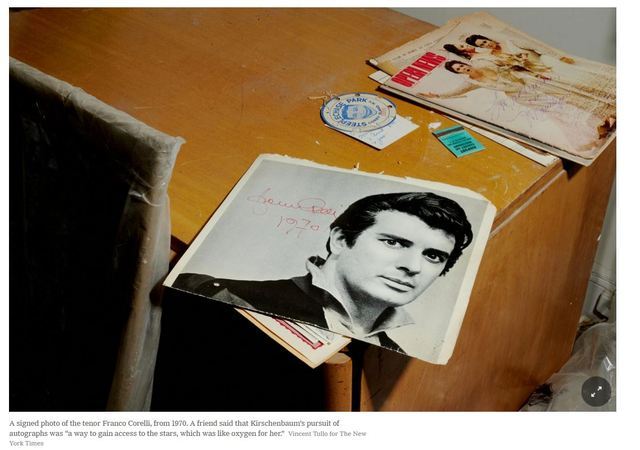 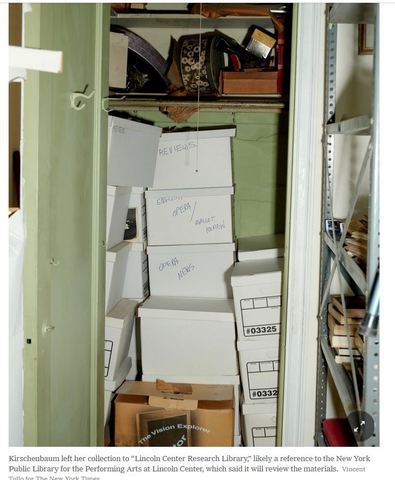 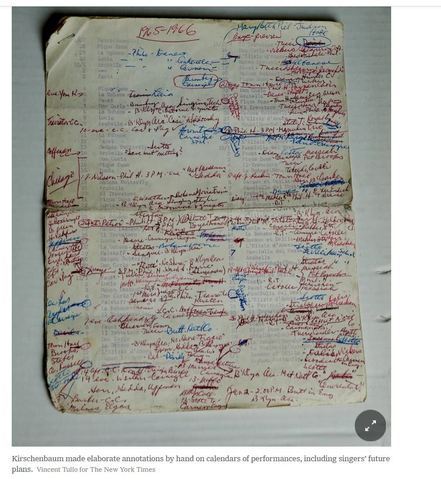 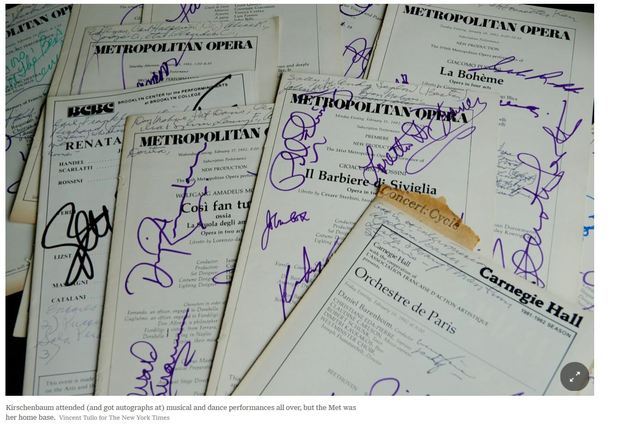 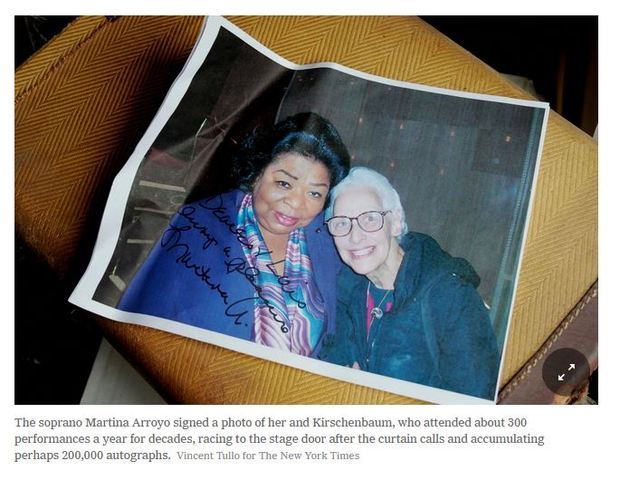 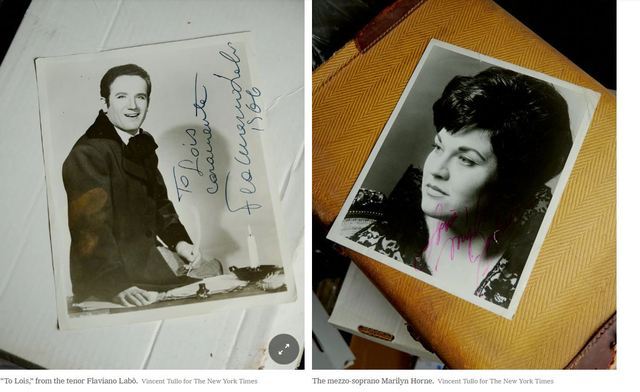 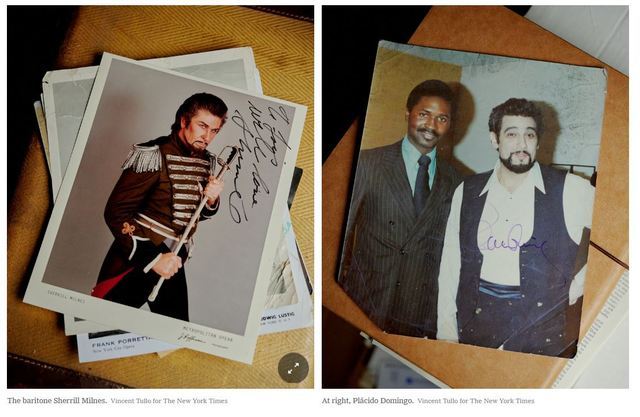 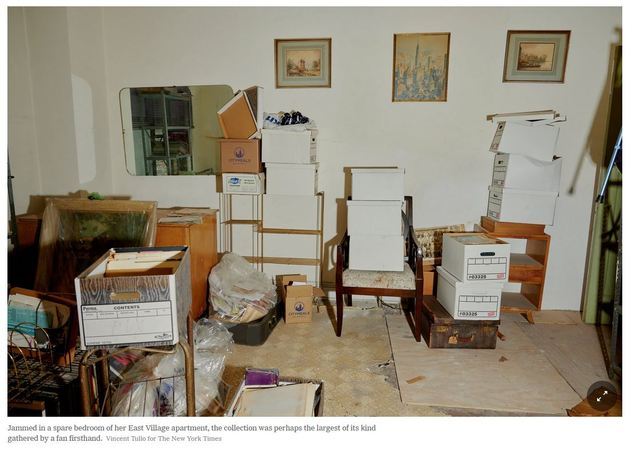 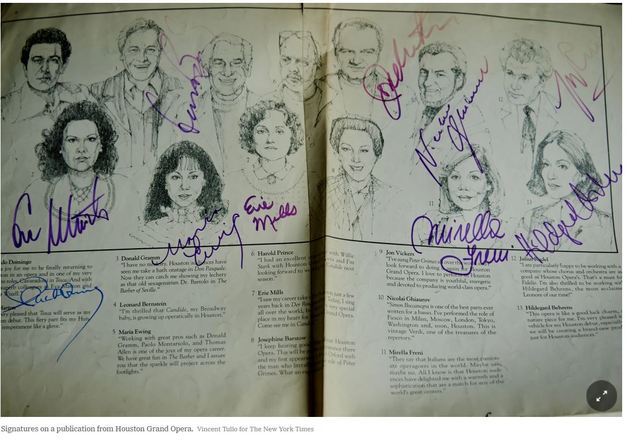 For many of opera’s greatest stars since the 1950s, writing that phrase before signing an autograph was both a rite of passage and an honor. After they had finished a long performance at the Metropolitan Opera, singers like Beverly Sills, Luciano Pavarotti, Plácido Domingo and Renée Fleming knew that Lois Kirschenbaum would be waiting at the stage door to greet them. The artists admired her almost as much as vice versa.

Until her death last month, at 88, she put her memorabilia in a spare bedroom of her rent-controlled East Village apartment, as it grew into perhaps the largest collection of its kind accumulated by a fan firsthand.

“It’s a musical time capsule of what went on in New York in classical music over 55 years,” said Carl Halperin, a longtime friend. “She didn’t even know what was in there anymore — it was just so much.”

Another friend, Sally Jo Sandelin, was in the apartment on a recent afternoon cleaning and sorting out Kirschenbaum’s belongings. “Lois didn’t throw anything out,” she said. “And since she was at performances every night and working every day, and legally blind, the stuff just piled up.”

The spare bedroom had long ago become a knee-high wading pool of paper, said Sandelin, who several years back began packing it all, still unorganized, into dozens of boxes.

The collection is striking in both its abundance and haphazardness. Each box is itself a seemingly endless trove, covering minor singers and household names alike, their signatures scrawled across magazine articles, reviews and publicity shots. But programs, most of all, and mostly from the Met — the pages listing each performance’s cast covered with autographs. “Plácido Domingo” is regally wrought on a Feb. 22, 1982, “La Bohème” program; “Luciano Pavarotti” on a photograph is a meandering sine wave.

Kirschenbaum reigned as the grande dame of a group of hard-core fans who populated standing room at the opera house and would flock to the stage door for autographs. It was a practice that helped her befriend some of the world’s most famous opera singers, who half-joked that they had truly arrived on the New York scene only after being approached by her after a performance. Her request for an autograph was considered “a special type of approval,” the mezzo-soprano Frederica von Stade said in an interview.


That approval came in large doses, as Kirschenbaum would often ask singers to sign stacks of items pulled from the oversize handbag she hefted, full of programs, photos, magazine clippings and other memorabilia. The soprano Aprile Millo recalled that Kirschenbaum might hand her 20 pieces at a time to sign.

Though a slightly built woman, she became known for charging like a linebacker to the front of the line for an autograph, that formidable handbag serving as a blocking device. Sandelin, herself a stage door fixture, said with a laugh, “We all have bruises from that bag.”

If Kirschenbaum often secured dozens of autographs a night, simple arithmetic indicates she may have amassed more than 200,000 over the decades. Her will, drawn up in 1992, directed her collection to be left to the “Lincoln Center Research Library,” likely a reference to the New York Public Library for the Performing Arts at Lincoln Center, said Elena Villafane, a lawyer representing Kirschenbaum’s estate.


The branch’s estimable opera collection includes the earliest known recordings of Met performances and rehearsals, and scores annotated by many great singers. Its executive director, Jennifer Schantz, said the library was “delighted and honored,” adding, “We look forward to reviewing the collection and learning more.”

Since the library does not accept all such donations, however, Kirschenbaum’s friends still fear the material might wind up discarded. “No one wants paper these days,” Halperin said. “They want everything digitized.”

Kirschenbaum grew up in Brooklyn and became an opera enthusiast after her previous obsession, the Brooklyn Dodgers, decamped for Los Angeles in the late 1950s. Her first love was the radiant soprano Renata Tebaldi, then in her glory. After just a few years of attending performances nightly, Kirschenbaum had amassed thousands of autographs.


One reason she requested multiple signatures from singers was to buy herself time to ask them about their upcoming performances. She carefully compiled this information into detailed, typewritten schedules, making copies to distribute to other buffs hungry for advance word of what the Met and other companies were planning.

Those faded lists were in abundance among the autograph piles, many annotated by hand. Kirschenbaum would also often scrawl her own brief critiques of performances on her programs. After a May 6, 1964, Met performance of “Aida,” she noted that the soprano Birgit Nilsson was “much improved from earlier” in the leading role, and that the mezzo-soprano Rita Gorr was “not in best voice but very exciting” as Amneris.

Halperin reeled off a few treasures he recalled Kirschenbaum procuring that were likely buried somewhere in the boxes: A program signed by James Levine, the Met’s longtime music director, after his 1971 debut conducting “Tosca”; another from Beverly Sills’s Met debut, in 1975; Maria Callas’s autograph, secured after a late-career concert at Carnegie Hall in 1974. When Kirschenbaum turned 75, in 2007, a party was held for her that drew such stars as Fleming, Marilyn Horne and Levine, who gave her a baton and an autographed score of “La Bohème.”

Her friends have speculated that Kirschenbaum’s refusal to spend money on bins is one reason her collection remained so disorganized. She was a notoriously frugal woman who insisted on taking the bus and subway to and from Lincoln Center, even late at night and in snowstorms.

Rather than purchase tickets, she would canvas operagoers at the entrance for extras or ask Met staffers she knew to let her slip in. To avoid the Met’s food prices, she would sneak in peanut butter and jelly sandwiches and a thermos of coffee.

In the end, though, it was clear that money was not a problem for her: Kirschenbaum died with around $2.5 million in savings, said Martin Hermann, the executor of her estate. She was an only child who never married or had children, and never spoke of any surviving family members. Her will calls for her money to go to three people and a variety of arts and other nonprofits.


But to the Met, the center of her universe for decades, she left nothing.

Halperin wondered if this related to a period, around the time Kirschenbaum created her will in the early 1990s, when she was banned from the Met’s backstage and relegated to the stage door because of her overzealous pursuit of autographs.

“That hurt her deeply,” he said, adding that she pursued the autographs merely as “an icebreaker: a way to gain access to the stars, which was like oxygen for her, to be basking in the glow of Pavarotti or Beverly Sills or Plácido Domingo.”

The signatures “were souvenirs,” Halperin said, “of a wonderful night.”

Re: Opera’s Biggest Fan Leaves Behind a Sprawling Time Capsule

What a remarkable, magnificent obsession.

It makes me sad that the MET banned her from going backstage for a while.

Her collection should be preserved as quickly as possible. So much history there.

Too bad she didn't find a partner to share her love of opera with.
Top
Post Reply
2 posts • Page 1 of 1