Renée Fleming Was Back Onstage. Here’s What Happened First.

Renée Fleming Was Back Onstage. Here’s What Happened First.

We saw Fleming last year at our only Shed outing last year in a pretty weird play-the article reminded me of how much we miss NYC-the new guidelines are tempting us to head back in and even stay at a hotel-a day like this where it will hit 80 for the first time this season makes me think of the High Line!
Regards, Len


Renée Fleming Was Back Onstage. Here’s What Happened First. 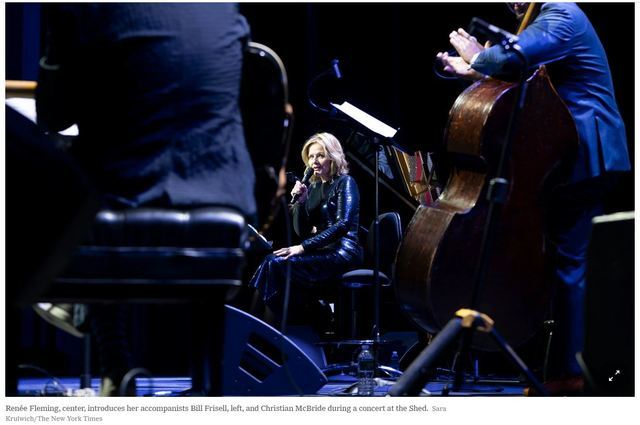 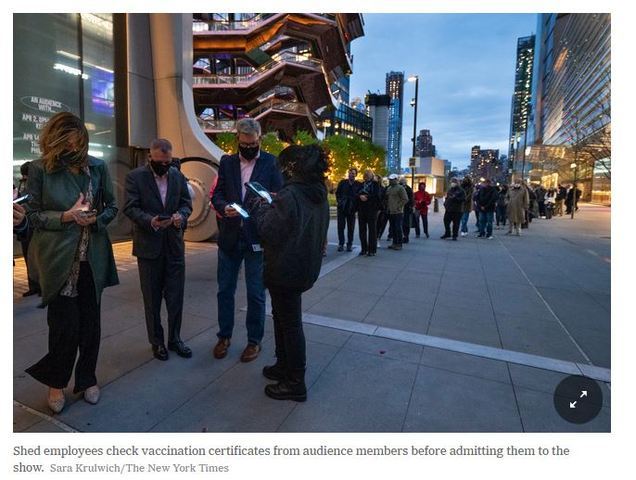 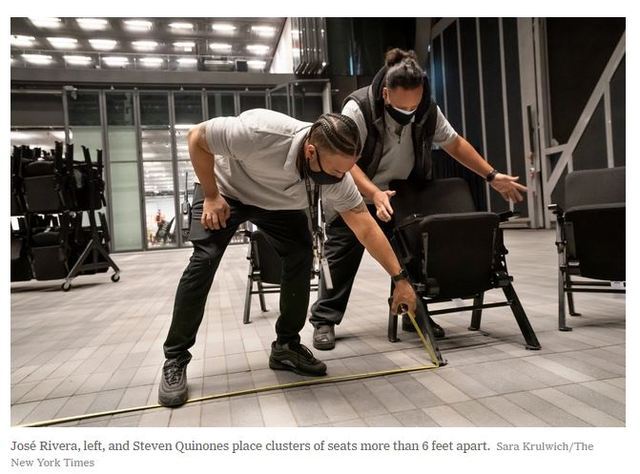 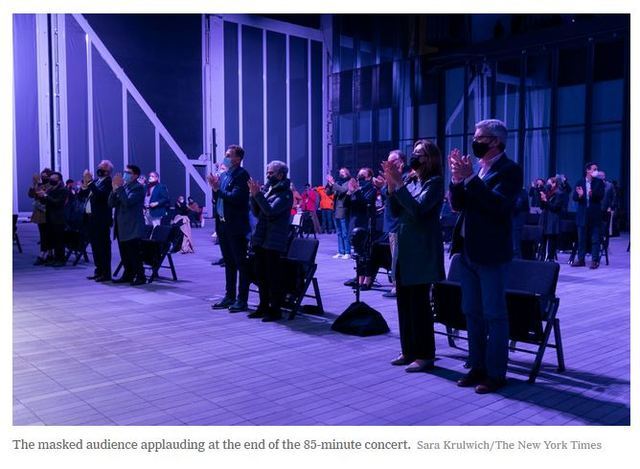 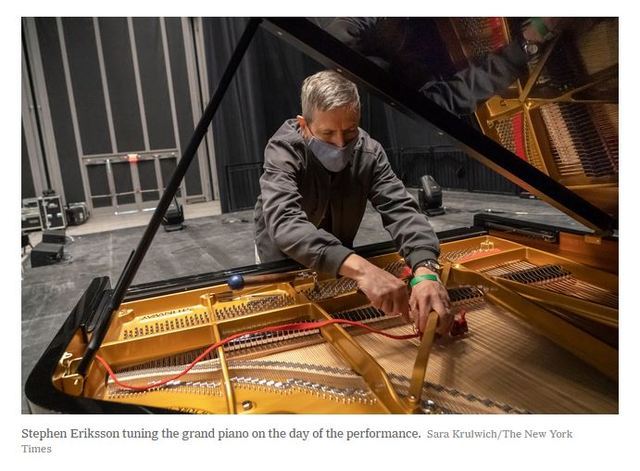 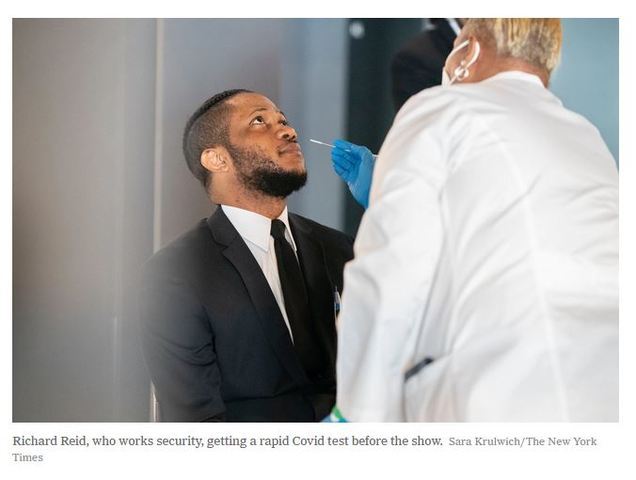 To pull together a 85-minute indoor concert at the Shed with the opera star and three musicians, everything had to go according to plan.

The soprano Renée Fleming sauntered onstage in a shimmering long-sleeve gown, perched on a chair and started to sing.

For a renowned performer decades into her career, it might have been an uneventful Wednesday evening at the Shed, the expansive performance space in Hudson Yards. But after 13 months in a pandemic, a sea of faces was a novel sight for the opera star and the trio accompanying her.

Exciting, indeed — and no mean feat to pull off.

After the Shed and other flexible New York performance spaces lobbied to let audiences in, it got the go-ahead to open its doors for a live event on April 2, after 386 days of shutdown. Fleming’s April 21 show there, before a limited audience, was the fourth performance in a series co-sponsored by NY PopsUp, a public-private program aimed at reviving the arts.

While the 85-minute show — a mix of classical, jazz and popular music — went off without a hitch, it demonstrated that mounting indoor events in New York at this stage of the pandemic will still be time-consuming, unpredictable and expensive.

To get Fleming and the musicians onstage involved dozens of hours of careful planning; hundreds of dollars in safety equipment like plastic face shields and hand sanitizer; and nearly $2,500 in coronavirus tests. All this for drastically reduced ticket revenue.

And while she may have been the headliner, pulling the show off took a large cast of behind-the-scenes figures, some of whom hadn’t worked regularly in the building for months.
Monday: Two days to showtime

In normal times, the staff in a preshow morning production meeting might be discussing last-minute program changes or the status of ticket sales.

On April 19, it was where and when Renée Fleming would get her rapid Covid tests.

She would arrive to rehearse at 1:30 p.m. the next day, the staff was told, and head to the sixth floor to the smaller Kenneth C. Griffin Theater, where her dressing room was located. There, she would meet a medical technician who would administer a nasal swab.


There would be no servers bringing the talent tea, coffee or food, per health department edict.

“We do the barest minimum,” said Laura Aswad, the Shed’s producer, noting that Fleming, who had acted in a play during the Shed’s opening season, wouldn’t be left completely untended: Bottled water, tea bags and a kettle would be in her dressing room.
Sign up for the Theater Update Newsletter: Every week, stay on top of the top-grossing Broadway shows, recent reviews, Critics’ Picks and more.

Alex Poots, the Shed’s chief executive, had one big announcement to share with the staff. The venue had not received state permission to expand the size of the audience. In the days leading up to the concert, the Shed had asked to double capacity from 150 to 300, which would still only be a fraction of the roughly 1,200 people the McCourt, its largest performance space, can seat.

But the state had essentially told them: Not so fast.

The concert had sold out in two hours. Audience members who did secure tickets had already received the first of four emails explaining the coronavirus protocols they would need to follow.

Gone was the chance to rush to a concert after work and plop down into your seat as the curtain rose. Before they entered the Shed, concertgoers would need to check one of three boxes: show proof of full vaccination; demonstrate a negative PCR test taken within 72 hours of the event; or have taken a rapid antigen test, which is less reliable, within six hours of showtime.

This was such a jumble of rules and dates that the front-of-house staff would be provided printed cheat sheets for the day of the show.

Tuesday: One day to showtime

The guitarist Bill Frisell was surrounded by piles of sheet music — some Handel, some Stephen Foster — laid out on the dining room table and the living room floor of his Brooklyn home. He was writing out his parts in pencil, referencing a list of songs that Fleming had sent to him, the bassist Christian McBride, and the pianist Dan Tepfer.

Pandemic restrictions meant only one in-person rehearsal before the day of the show, and Frisell was in study mode. He had played alongside Fleming before — they had recorded an album in 2005 — but never alongside Tepfer or McBride.

“It adds a level of stress to the event, no question,” Fleming said. “We still have a lot to figure out in terms of how we’re arranging everything.”

As Frisell was reviewing the sheet music to Cole Porter’s “Down in the Depths (on the Ninetieth Floor),” Fleming was up on East 57th Street, visiting her longtime hair stylist, Michael Stinchcomb, at Vartali Salon.

Stinchcomb has been an avid fan since the 1990s and first met Fleming backstage at Carnegie Hall. He’s been doing her hair for more than two decades, often traveling around the world when she performs.

But last winter Fleming moved from New York to Virginia, and the pandemic had prevented her from visiting Stinchcomb until the day before her Shed performance.

“She was so happy to come in,” Stinchcomb said. “She’s a woman who likes to look good.”

Later that afternoon, Fleming arrived at the Shed for a three-hour rehearsal, where she and the musicians discussed harmonies, tempos and spots for improvised solos.

“A full rehearsal the day before a show?” McBride said. “That’s a lot in the jazz world.”

That made the grade: According to state rules, the distance between audience members had to be over six feet.

He and another facilities employee, Steven Quinones, had been arranging the chairs for some two hours, ensuring that the setup matched a detailed paper diagram.

“And see, this is the big aisle that people walk through, so it’s 9 feet, 5 inches,” Rivera continued, raising his voice to be heard over the whirring of a third colleague zooming around the room on an industrial floor scrubber.

Five floors up, Josh Phagoo, an operations engineer, checked up on one of the Shed’s most important technologies for Covid safety: the HVAC system. Massive air handlers and chillers in the building’s engine room whirred constantly as Phagoo made sure the machines that keep the air at roughly 70 degrees Fahrenheit and the humidity at 50 percent were functional.

On the stage itself, the first piano notes of the day were vibrating through the air, up to the McCourt’s 115-foot ceiling.

Stephen Eriksson had arrived at 11 a.m. to tune the gleaming Steinway grand piano. While he said his business had disappeared for the first four months of the pandemic, now he is busier than ever.

For nearly 30 minutes, he used a tuning wrench to make sure that the piano was concert ready. Afterward, he played a bit of Debussy and “Twinkle, Twinkle, Little Star.”

“That’s a bit of pure indulgence,” he said.

Within 15 minutes after arriving at the Shed, Fleming — who was scheduled for her second vaccine in New York the morning after the show — got the rapid Covid test in her dressing room. Negative.

Afterward, she rehearsed onstage with the musicians, their instruments positioned more than six feet apart from one another, while an audio crew member in a mask and a face shield flitted around them, making sure everything was working properly.

The six-person crew working the show was slightly smaller than usual, according to Pope Jackson, the Shed’s production manager. Everywhere they went, they brought along what Jackson referred to as a “Covid cart,” which contained a stock of masks, gloves, sanitation supplies and brown paper bags, which the musicians’ union requires so that players have a clean place to put their masks while they perform.

Downstairs, a staff of eight security guards had their nostrils swabbed to make sure that they tested negative.

Fleming and the musicians had been doing virtual and outdoor concerts throughout the pandemic, but the security staff was filled with people whose careers had been even more upended.

Allen Pestana, 21, has been unemployed for more than a year after being let go from working security at Yankee Stadium; Duwanna Alford, 53, saw her hours cut at a church in Morningside Heights; Richard Reid, 33, had worked in April 2020 as a security guard at a field hospital in Manhattan, where he had tried to forget his health fears and focus on the hazard pay he was receiving.

This was the moment before a concert where the theater was alive with preparation and nerves — a bustle missing in the city during the first year of the pandemic.

“It’s like doing the electric slide, the moonwalk and the bachata all at once,” Jackson said of the minutes before showtime. “But when the lights go up, it all fades away.”

The front-of-house staff had only 20 minutes to review the audience members’ IDs and Covid-related documents; take their temperatures; and show them to their seats.

Icy gusts of wind just outside the doors weren’t making things any easier.

But by 8:05 p.m., 150 people had settled into their precisely placed seats, able to snap a photo of the QR code on the arms of the chairs to see the concert program.

In between performances of the jazz classic “Donna Lee” and “Touch the Hand of Love,” which Fleming had once recorded with Yo-Yo Ma, the artists chatted onstage about what they’d been doing with their lives for the past 13 months.

“Wishing this pandemic would be over,” McBride said.

Tepfer said he had been improving a technological tool that made it easier for musicians to play in unison over the internet — a tool that he and Fleming had used to rehearse together virtually.

Frisell had not performed for an indoor audience since the beginning of the pandemic. “This is such a blessing,” he said.

The show ended with a standing ovation, and then the musicians played an encore: “Hard Times” by Stephen Foster, which Fleming described as a song that tends to resonate in times of crisis.

Re: Renée Fleming Was Back Onstage. Here’s What Happened First.

Thanks for posting this, Len.

Users browsing this forum: No registered users and 59 guests