I wasn't familiar with him but a Met search came up with
Search results for: Lambrinos
28 items found.

Mention of Coney Island and Erasmus Hall--familiar places for me! Regards, Len

Mr. Lambrinos sang performances at the Metropolitan Opera and was a stalwart of New York Grand Opera. He died of Covid-related pneumonia. 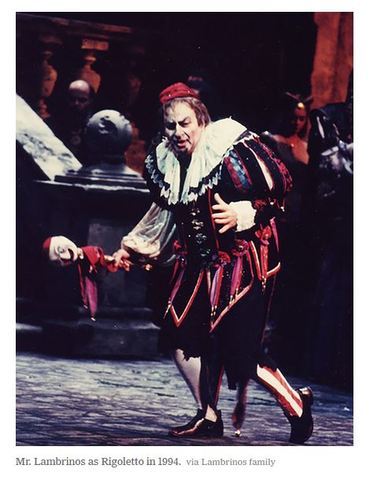 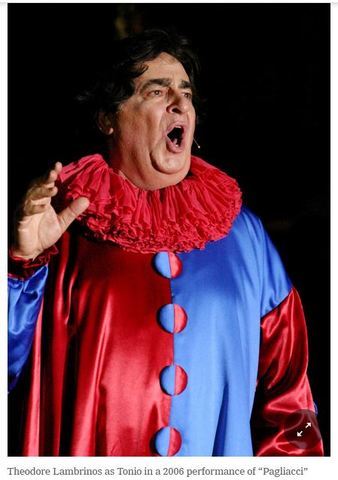 
The baritone Theodore Lambrinos once sang 21 performances as Scarpia in Puccini’s “Tosca” over 26 days on an American tour with the barnstorming Teatro Lirico d’Europa, based in Bulgaria.

“I just want to sing,” he told Opera News in 2002, while in the middle of another extended American tour with the company. “I have got my voice all lined up,” he said, “and I want to use it.”

And use it he did: over his 60-year career, he gave nearly 800 performances in three dozen countries in opera productions (some 60 roles) and in concerts of arias, Broadway fare and Hellenic songs (a lifelong passion).

Mr. Lambrinos died on March 29 in Brooklyn of pneumonia related to Covid-19, his wife Hallie Neill, a soprano, said. He was 85.

He also sang with the Metropolitan Opera, a career achievement that he found hard to imagine as a Greek immigrants’ son in Brooklyn who hung out at Coney Island, attended Dodgers games and sang in a Greek Orthodox choir.


Mr. Lambrinos became a stalwart with another popular enterprise, the New York Grand Opera Company, which under its founding director Vincent La Selva presented free staged operas in Central Park. Reviewing Mr. Lambrinos’s 1983 performance of the title role in Verdi’s “Nabucco” at the Naumberg Bandshell for The New York Times, the critic Tim Page wrote that Mr. Lambrinos’s portrayal “proved that there is a place for refinement and elegance in the world of early Verdi.”

Theodore Lambrinos was born in Brooklyn on July 25, 1935, to Lambros and Millie (Pappas) Lambrinos. His father started off as a professional lightweight boxer, with some 60 fights in New York. He went on to run a furniture refinishing business, where his son helped.

After graduating from Erasmus Hall High School in Brooklyn, Mr. Lambrinos studied voice privately. He joined the Don Cossack Choir and performed in Off Broadway shows.

Mr. Lambrinos’s break in opera came when he sang in the finals concert of the Met’s National Council Auditions in 1965. His Met debut was in 1968 as the Herald in Wagner’s “Lohengrin” (with, during one performance, both Christa Ludwig, who died on Saturday, and Leonie Rysanek in the cast), and followed up later in the season with Escamillo in Bizet’s “Carmen.”


In the early 1970s, though, he had a vocal setback due to a severe allergic reaction to chlorine when, as a prank, a colleague during a tour pushed him in a swimming pool, Ms. Neill said in a phone interview. For several years, he left music and with his first wife, Parthena Karipides, a dancer by training (who died in 1992), managed rental properties until, his voice restored, he returned to the stage in a New York Grand Opera production of “La Bohème.”

By the mid-1990s, he was back on the Met’s roster, singing the title role of Verdi’s “Rigoletto” in a tour of parks in New York and New Jersey, and, at the house, appearing as Montano in Verdi’s “Otello” (to open the season in 1995 alongside Plácido Domingo and Renée Fleming).

In later years, traveling with a vocal quartet under the auspices of the Ambassadors of Opera organization, he performed in India, Thailand, the Philippines and elsewhere. He met Ms. Neill, his wife since 1999, at the Cairo Opera during a production of “Carmen,” with Mr. Lambrinos singing Escamillo and Ms. Neill as Micaëla.

They often performed together in concert programs. Along with Ms. Neill, he is survived by a daughter, Kari, and a son, Ted, from his first marriage; a sister, Clara Paul; and two grandchildren.

Re: Theodore Lambrinos, Baritone With a Zest for the Road, Dies at 85

Ted Lambrinos was very nearly a judge in my competition, but his schedule at the MET kept getting in the way. His manager was on my panel, and she introduced me to Richard Kness and Joann Grillo, both ex-MET stars who had retired by the time I knew them and were producing concerts in the Middle East as the impressarios of "The Ambassadors of Opera," which is mentioned in the obit above without attribution. Ted was a delightful man who often sang in Vincent La Selva's productions. He gave me a cassette that he had produced in a New York studio that featured a sung high Bb, a note beyond any other baritone I've ever heard. A remarkably kind and generous man, he once produced a concert in Avery Fisher Hall that featured a Greek dramatic mezzo-soprano that I referred to him who had come to me from a conductor at the MET: Ann Plagianos (See link below), who sadly left this world suddenly in 2007. I remember she sang Ebboli and "Acerba volutta..." from Adriana Lecouvreur with me in Carnegie Hall as a finalist. Needless to say, Joann Grillo, who was a judge, was quite jealous!