When the Cellos Play, the Cows Come Home

When the Cellos Play, the Cows Come Home 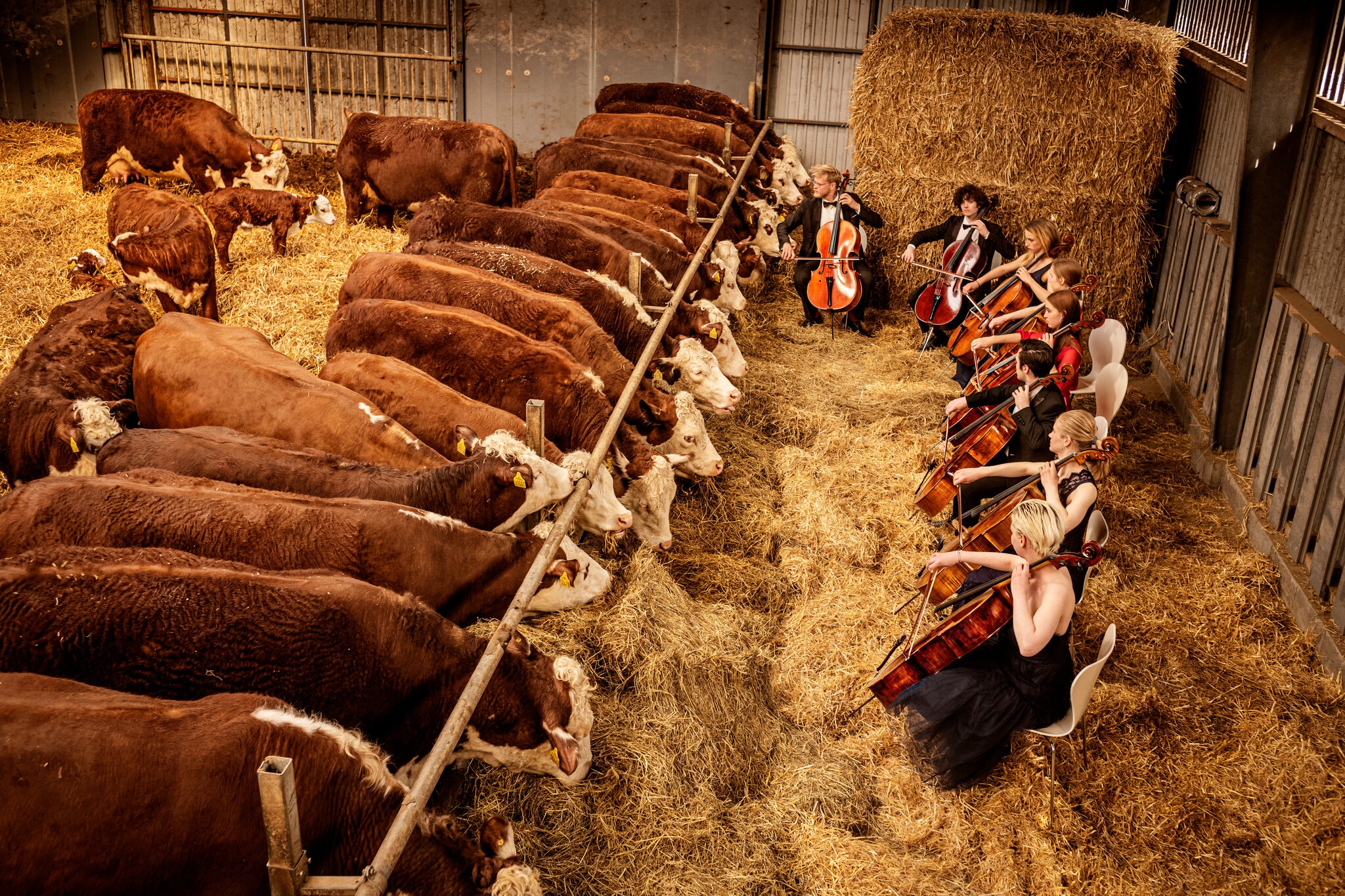 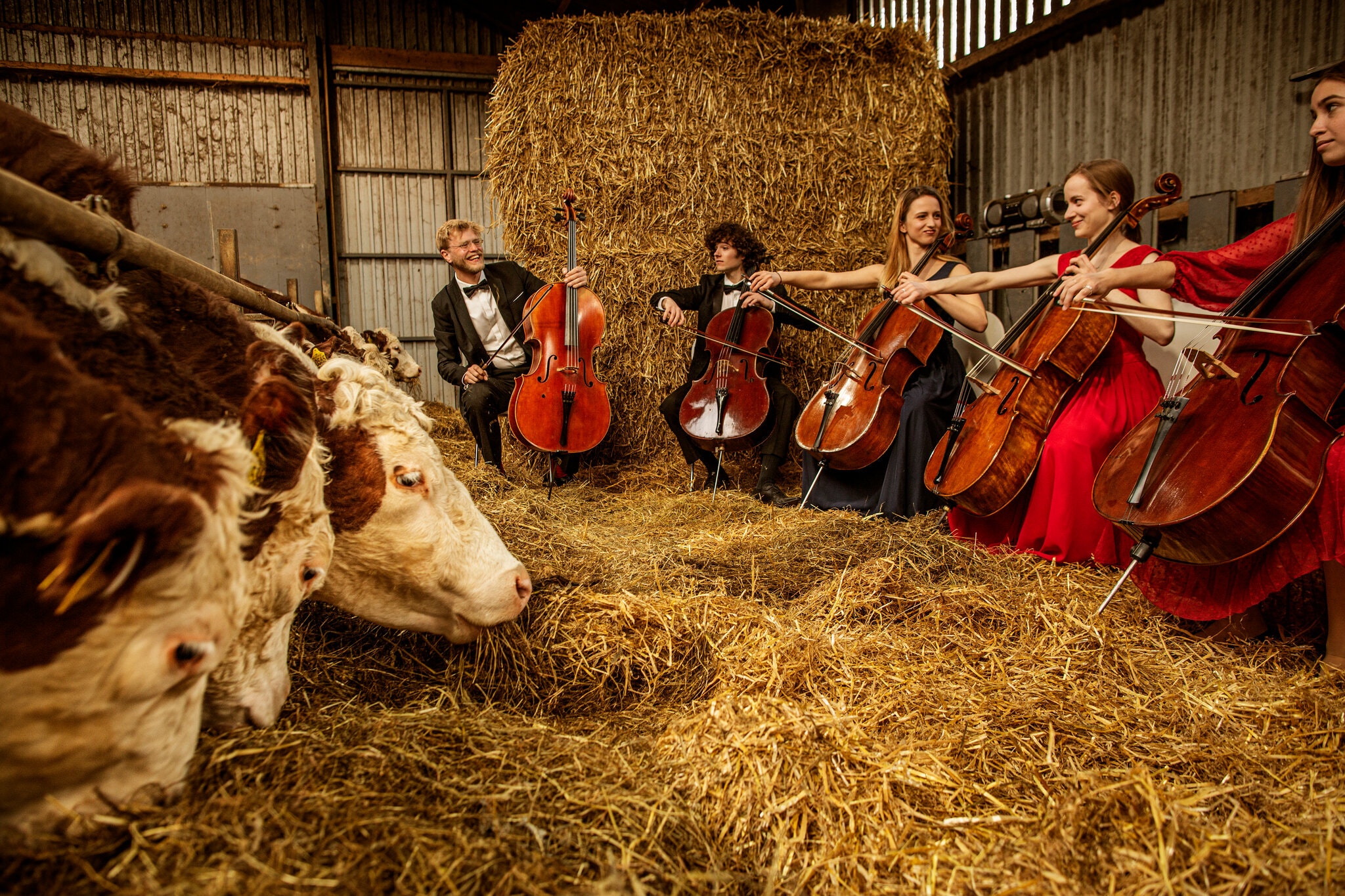 The Students of the Scandinavian Cello School performing for Mogens and Louise Haugaard’s cows on April 23.Credit...Carsten Snejbjerg for The New York Times

A collaboration between a cattle farmer and a Danish music training program brings regular recitals to pampered livestock.

When it was over, amid the fervent applause and cries of “bravo,” there could be heard a single, appreciative moo.

On Sunday, in Lund, a village about 50 miles south of Copenhagen, a group of elite cellists played two concerts for both some music-loving cows and their human counterparts. The culmination of a collaboration between two local cattle farmers, Mogens and Louise Haugaard, and Jacob Shaw, founder of the nearby Scandinavian Cello School, the concerts were meant to attract some attention to the school and the young musicians in residence there. But to judge by the response of both two- and four-legged attendees, it also demonstrated just how popular an initiative that brings cultural life to rural areas can be.

Until a few years ago, Shaw, 32, who was born in Britain, had toured the world as a solo cellist, performing in hallowed venues including Carnegie Hall and the Guangzhou Opera House. When he moved to Stevns (the larger municipality to which Lund belongs) and opened the Scandinavian Cello School, he soon discovered that his neighbors the Haugaards, who raise Hereford cows, were also classical music lovers. In fact Mogens, who is also a former mayor of Stevns, sits on the board of the Copenhagen Philharmonic Orchestra.


When the cellist, who had toured Japan, told the farmer about how the country’s famously pampered Wagyu cows were raised to produce tender beef, it didn’t take much convincing for Mogens to adopt one component of their upbringing for his own cattle.

Beginning in November 2020, a boom box playing Mozart and other classical music in the Haugaard barn has serenaded the cows daily. About once a week, Shaw and any students in residence have come over for a live performance.

Although it remains unclear whether their new listening habits have affected the quality of the cows’ meat, the farmer noted that the animals come running whenever the musicians show up, and get as close as possible while they play.

“Classical music is very good for humans,” Haugaard said. “It helps us relax, and cows can tell whether we’re relaxed or not. It makes sense that it would make them feel good too.”

It’s not always good for the people who perform it, however. Shaw said he founded the Scandinavian Cello School to help fledgling musicians prepare for the less glamorous demands of a professional career in an industry that can sometimes chew up young artists in the constant quest for the next big thing.

While touring internationally as a self-managed artist, he found himself exhausted by the grind of negotiating contracts, promoting himself and relentless travel, he said in an interview. That experience — coupled with a stint as a professor at a prestigious music academy in Barcelona — made him realize there was a hole there that needed filling.


“I kept coming across fantastic young talents who simply weren’t being given the tools to get out there,” said Shaw. They might have excellent teachers to work with them on the music itself, but what was missing was “that extra bit of help,” he said, in the areas like booking concerts, preparing for competitions and handling social media.

In its original incarnation, the Scandinavian Cello School was an itinerant organization — more a traveling boot camp than an academy. But in 2018, Shaw and his girlfriend, the violinist Karen Johanne Pedersen, bought a farmhouse in Stevns and turned it into a permanent base for the school. Its students, who come from all over the world and are mostly aged between 17 and 25, stay for short-term residencies at which they hone their musical as well as professional skills — including how to achieve a work-life balance.

The location helps with that. Situated less than a half mile from the sea, the school also offers the visiting musicians the opportunity to help out in a vegetable garden, forage in the nearby forest, fish for dinner, or just relax in an area far from the city.

That environment is part of what drew Johannes Gray, a 23-year-old American cellist, currently living in Paris, who won the prestigious Pablo Casals International Award in 2018. Gray initially visited the Scandinavian Cello School in 2019, and then returned for in the school’s first post-pandemic intake, attracted by both the career development opportunities and the leisure activities.

“Jacob’s been giving me advice on how to create a program and basically package it to make it more interesting,” Gray said. “But we’re also both extreme foodies, and we love cooking, so after a long day of practicing, we can go out and fish, or plan this huge feast. It’s not just about the music.”

As much as the musicians benefit from the environment, so this primarily agricultural region profits from the small influx of international artists. The school receives some financial support from local government and businesses. In return, the visiting musicians — seven have come for the current residency — perform at schools and care facilities in the region. And they play for the cows.


Because of coronavirus restrictions, the two concerts on Sunday were held outdoors, and human attendance for each was limited to 35. (Both sold out.) Among the attendees, who had the opportunity to snack on burgers made by a local chef from the Haugaards’ beef, was Denmark’s minister of culture, Joy Mogensen, who noted that this was the first live concert she had attended in six months.

“I’ve witnessed a lot of creativity these last months,” she said in an interview. “But digital just isn’t the same. I hope it’s one of the lessons we take from corona, how much we all — even cows — miss being together for cultural events.”

Both species in attendance seemed to enjoy themselves. Before the concert, the cows were been scattered across the field, munching grass in the bright sunshine and nursing their newborn calves. But as the musicians, clad in formal wear, took their seats on the hay-strewn stage, and began the dramatic opening bars of the Danish composer Jacob Gade’s “Jalousie (Tango Tzigane),” the cows crowded over to the fence that separated them from the human audience, and jostled for position.

After a program including an arrangement of Liszt’s “Hungarian Rhapsody” and a crowd-pleasing encore of Édith Piaf’s “Hymne de l’Amour,” the musicians were as charmed by their livestock listeners as their human ones.

“It’s actually nice playing for cows,” said Gray. “We saw it in rehearsal — they really do come over to you. And they have preferences. Did you see how they all left at one point? They’re not really Dvorak fans.”

Quell dommage, Dvorak's time in Iowa for naught , perhaps, although I recall no cows' complaints reported here at the time . I wonder, though,if they played from his "American" Quartet ?
Top

Quell dommage, Dvorak's time in Iowa for naught , perhaps, although I recall no cows' complaints reported here at the time . I wonder, though,if they played from his "American" Quartet ?

I got such a kick out of this article I just had to post it here!

Can we really be getting back to normal, where such whimsical and uplifting stories can again be our focus?

One can only hope so.
Top

Yes, highly diverting, thanks Brian. I am sure to quote it in some upcoming article!
Top

Maybe they can try a chamber arrangement of Mahler's 6th or 7th on the cows, for a little bit of audience participation.
Black lives matter.
Top

diegobueno wrote: ↑
Sat May 01, 2021 8:27 am
Maybe they can try a chamber arrangement of Mahler's 6th or 7th on the cows, for a little bit of audience participation.

You're thinking of the cowbells in the Sixth Symphony?