Today in the mail came the 17-CD Sony Classical (Columbias) set arrived. For some reason, I was kind of worried we might see that for production reasons, or whatever. [Now, the only worry is the Rodzinski set to arrive.] The price via Amazon dropped to $47/USD for this set, a savings of $12/USD over their original price.

Once one gets used to Szigeti's wide vibrato, which is discussed within the booklet by Tully Potter, the musicianship is supreme. All the recordings made for Columbia are here. Partnerships include Szell, Ormandy, Walter, Goberman, Stiedry, Casals and others as conductors. Pianists include Bussotti, Horszowski, Foldes, I-Stravinsky, L-Hambro, Joseph Levine, Myra Hess, Istomin, Bartok, Smit, Cowell. Many other illustrious collaborators as well.

In the end of the booklet, there is this note: More Joseph Szigeti recordings made by His Master's Voice in London and Paris or concert broadcasts were released on LP in the U. S. under the Columbia imprint. These recordings were distributed under license and their ownership remains with HMV / Warner Classics; they are therefore not included in this set of Szigeti's complete Columbia Masterworks recordings." Of those "HMV" recordings, in my view, several works are very important: Brahms' Violin Sonata No. 3 in D Minor, Op. 108 with Egon Petri, pianist; Brahms Violin Concerto with the Hallé Orchestra led by Barbirolli; Mozart four violin concertos with Beecham conducting, the Bloch Violin Concerto with Munch conducting. The pieces identified have all been issued on CDs in the EMI days (and may still be available under the Warner logo). It would not surprise me, however, if Warner will come forth with their own edition of Szigeti's complete recordings for HMV in London and Paris to further augment the Szigeti legacy.

One suggestion on a first listening: The Tartini Violin Concerto in D Minor with Szell leading the Columbia Symphony Orchestra ... perhaps my favourite recording introduced to me by old collector friend, Dr. Gary R. Lemco years ago.

I have a reasonable number of Szigeti CDs, including the complete Mozart sonatas, some Bloch and Stravinsky. Must go and remind myself, in view of your remarks, Lance.
Top

Like you, Barney, I, too, have many original LPs and many CDs including the Vanguard Mozart sonatas recordings and any on EMI as well. I always think of his wide vibrato, apparently something from the "Hubay" era, and that sound always perplexed me. But in hearing again these marvelous transfers, I listen with new ears to hear the beauty of his playing, especially with some composers such as Schubert, Tartini, and Baroque-era composers in general. All I can tell you is that I am very happy to have this set, and knowing your likes to some degree, I think you will enjoy it as well.

barney wrote: ↑
Fri Apr 30, 2021 6:59 pm
I have a reasonable number of Szigeti CDs, including the complete Mozart sonatas, some Bloch and Stravinsky. Must go and remind myself, in view of your remarks, Lance.

What a marvelous box, Lance, from a great artist who was born at the end of the nineteenth century! He made his first recordings at the dawn of the flat disc era in 1903 or so I've read.

I wonder if you have this DVD, made from TV broadcasts in the 1950's and early '60's? It has Tartini's concerto and other gems. I'm planning on getting a copy, along with the box you just received: 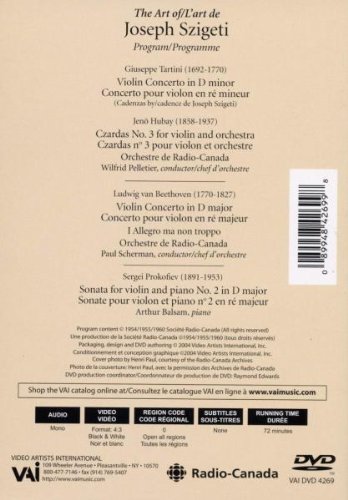 Video of Joseph Szigeti and Artur Balsam playing the slow movement of the Prokofiev Sonata in D Major for Violin and Piano.
https://youtu.be/3jWSCc3osKc
Donald Isler
Top

Donald Isler wrote: ↑
Sun May 02, 2021 7:52 pm
Video of Joseph Szigeti and Artur Balsam playing the slow movement of the Prokofiev Sonata in D Major for Violin and Piano.
https://youtu.be/3jWSCc3osKc

Thanks, Don, for finding that. It was actually that track that compelled me to find and buy the DVD I posted above.