Rossini at the Drive-In, as San Francisco Opera Returns

Rossini at the Drive-In, as San Francisco Opera Returns

Honks instead of applause: An open-air “Barber of Seville” brought the company back after 16 months. 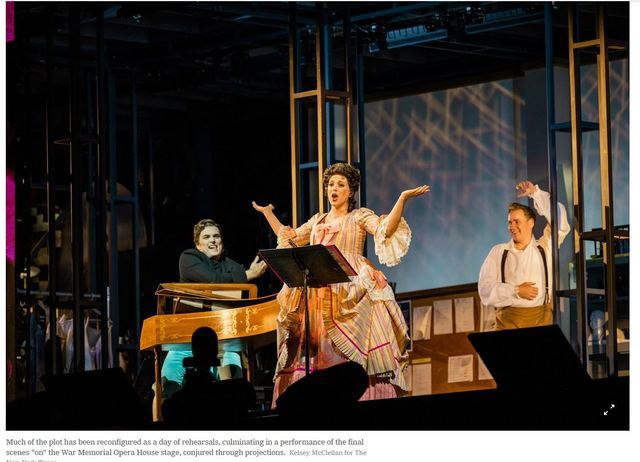 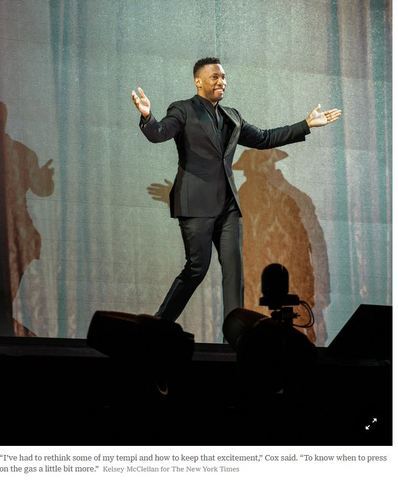 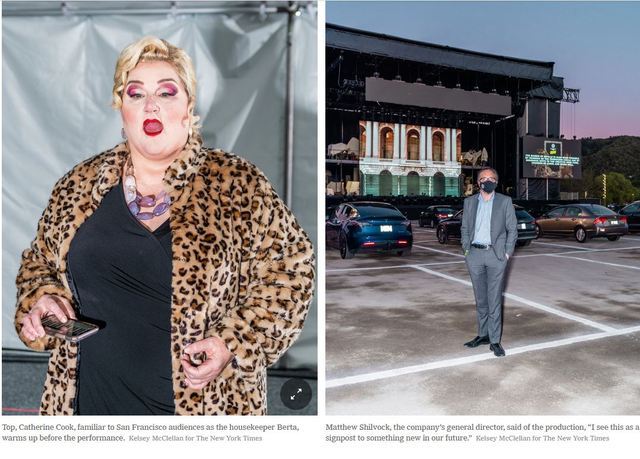 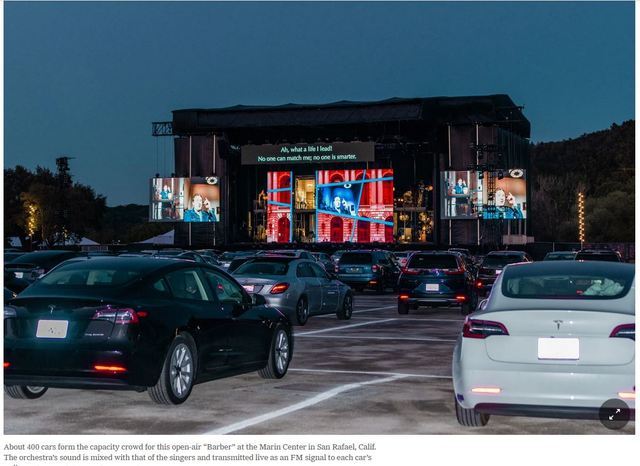 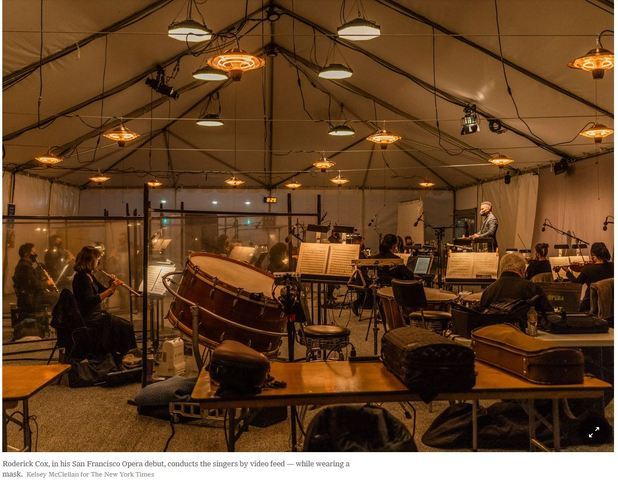 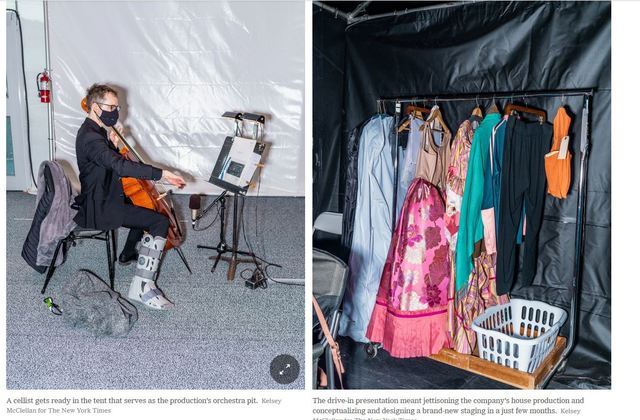 SAN FRANCISCO — It feels almost too good to be true after a pandemic closure of Wagnerian scale: an audience watching a cast of singers enter the War Memorial Opera House here to rehearse and perform Rossini’s classic comedy “The Barber of Seville.”

And, indeed, we’re not quite there yet. After 16 months, San Francisco Opera did return last week to live performance with “The Barber of Seville,” but not indoors at the War Memorial, its usual home. Rather, it is presenting the work through May 15 some 20 miles north, in a Marin County park. The cast for this abridged version is pared down to six main characters, who appear as singers coming back to work at the opera house to embody their Rossinian counterparts.

Much of the plot has been reconfigured as a day of rehearsals, culminating in a performance of the final scenes “on” the War Memorial stage. By then, contemporary street clothes have been replaced with 18th-century-style costumes — the illusion of art restored, at long last.

San Francisco Opera needs it, too. With its centennial season fast approaching, in 2022-23, the company is trying to write the most dramatic crisis-and-comeback chapter of its history at breakneck speed.


The damage has been brutal. Arts organizations around the world have been devastated by pandemic shutdowns, but San Francisco has been closed significantly longer than most. Because of the structure of its season, which splits its calendar into fall and spring-summer segments, its last in-person performance was in December 2019.

This enforced silence has come at great cost: Eight productions had to be canceled, wiping out some $7.5 million in ticket revenue. The company, which struggled with deficits even before the pandemic, has had to make around $20 million in cuts to its budget of roughly $70 million. In September, its orchestra agreed to a new contract containing what the musicians have called “devastating” reductions in compensation.


“We felt that it was so important to get back to live performance when we could,” said Matthew Shilvock, the company’s general director. “There has been such a hunger, a need for that in the community.”

Like opera companies in Detroit, Chicago, Memphis, upstate New York and elsewhere, San Francisco’s return has a retro precursor: the drive-in. “The Barber of Seville” is being presented on an open-air stage erected at the Marin Center in San Rafael. Audience members, in their cars, can opt for premium “seats” with a head-on view of the stage, or for a neighboring area where the opera is simulcast on a large movie screen — for a total capacity of about 400 cars.


The logistics necessary to bring this off have been complex — not only to adapt to an unaccustomed space, but on account of Covid protocols, which in the Bay Area have been among the strictest in the country. The company has adhered to a rigorous regimen of testing and masking; wind players have used specially designed masks, and in rehearsals the singers wore masks developed by Dr. Sanziana Roman, an opera singer turned endocrine surgeon. Even during performances, the cast members must remain at least eight and a half feet away from each other — 15 feet if singing directly at someone else.

Shilvock realized in December that it might be possible to bring live opera back around the time of the company’s originally planned April production of “Barber,” but only if he could “remove as many uncertainties as possible.” The idea of a drive-in presentation began to take shape. But that meant jettisoning the company’s house production and conceptualizing and designing a brand-new staging in a just few months.


A village of tents behind the stage houses the infrastructure and staff needed to run the show. One tent acts as an orchestra pit, where the conductor Roderick Cox, making his company debut, leads a reduced ensemble of 18 players. Along with adapting to using video screens to communicate with the singers — while wearing a mask — Cox noted an added layer of challenge in the absence of audible responses from the audience.

“I’ve had to rethink some of my tempi and how to keep that excitement,” he said. “To know when to press on the gas a little bit more.”

The orchestra’s sound is mixed with that of the singers and transmitted live as an FM signal to each car’s radio. “Rather than sound coming through big speaker clusters, across a massive parking lot,” Shilvock said, “it comes straight from the stage and from the orchestra tent into your vehicle.”


A sense of drive-in populism — keeping in mind the comfort and attention spans of automobile-bound listeners — resulted in the decision to present a streamlined, intermission-less, English-language “Barber,” about 100 minutes long. All of the recitative is cut, along with the choruses.

The familiar War Memorial Opera House is conjured through projections of the theater’s exterior and replicas of its dressing rooms as part of Alexander V. Nichols’s two-level set. Ozawa’s staging takes as a poignant underlying theme the transition back to live performance: The singers, with sometimes witty self-consciousness, must negotiate a labyrinth of distancing precautions, but with a hopeful sense of soon being able to return to much-missed theaters.

The mezzo-soprano Daniela Mack, who stars as Rosina, spoke in an interview of the cathartic effect of finally being able “to perform for actual people, to have that connection with an audience.” The tenor Alek Shrader, her lover in the opera and her husband in real life, said he felt “a combination of nostalgia and excitement for what’s to come.”

For all of the production’s novelty, there was something reassuring about the familial ease with which the cast interacted. Mack and Shrader are reprising roles they have performed previously here in San Francisco opposite Lucas Meachem’s charismatic Figaro. And Catherine Cook’s sympathetic housekeeper Berta has been a fixture of “Barber” at the company since the 1990s. All four, as well as Philip Skinner (Dr. Bartolo) and Kenneth Kellogg (Don Basilio), emerged from San Francisco’s Adler Fellowship young artists program.


Shilvock said the production costs for “Barber” were comparable to what the company would have spent for the 2021 summer season it had planned prepandemic — but building the temporary venue and Covid restrictions added between $2 and $3 million in extra costs.

Still, Shilvock said it has been worth it — and on opening night on April 23, the curtain calls were greeted with an exuberant chorus of honks. Shilvock said that around a third of “Barber” ticket buyers were new to the company.

“I’m not seeing this in any way just as a band-aid to get us through to the point where we go back to normal,” he said. “Rather, I see this as a signpost to something new in our future. It’s creating this energy for opera for people who would never have otherwise given us a thought.”

Re: Rossini at the Drive-In, as San Francisco Opera Returns

Shilvock said the production costs for “Barber” were comparable to what the company would have spent for the 2021 summer season it had planned prepandemic — but building the temporary venue and Covid restrictions added between $2 and $3 million in extra costs.

That's a bit above my paygrade!

We should have something like this here in Central Park, I think. Where's Vincent La Selva's ghost when we need him?

Maybe Michael Capasso could pull this off?
Top
Post Reply
2 posts • Page 1 of 1