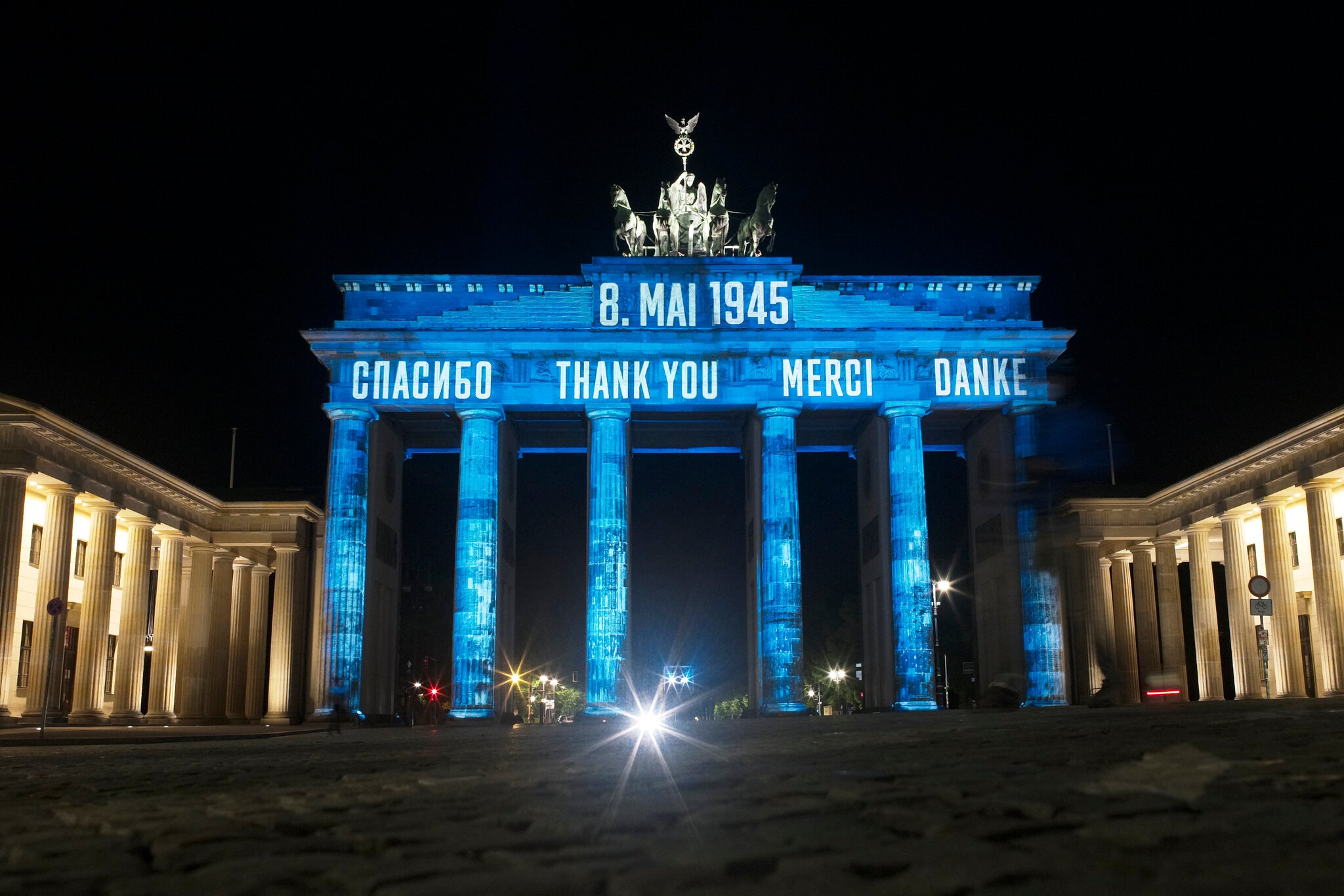 Brandenburg Gate in Berlin last year on the 75th anniversary of Victory in Europe Day. Credit...Markus Schreiber/Associated Press
The first word on the left is in Cyrillic (Russian), and reads "Spacebo," which means "Thank-you."

Mr. Angelos is a writer and journalist based in Berlin who covers Europe. He is a contributing writer for The New York Times Magazine.

BERLIN — Victory in Europe Day, the anniversary of Nazi Germany’s military capitulation to the Allies on May 8, 1945, is an occasion of unreserved celebration across much of the continent, observed with colorful parades and national holidays. For Germans, it is understandably fraught.

For a long time, the anniversary was largely defined in Germany by ambivalence. How, after all, could the vanquished celebrate their surrender? Now Germans are increasingly grappling with a thornier question: How could they not?

Over recent decades, it has become an ever more common convention in Germany to commemorate May 8 as a day of “liberation.” Germany, the thinking goes, was saved from the evils of Nazism, and therefore Germans, too, ought to rejoice. There have been growing calls — particularly from leftist parties — to make May 8 a holiday. Last year, on the 75th anniversary of V-E Day, the city of Berlin observed a one-time public holiday, The Day of Liberation From National Socialism and the End of the Second World War. A message in English, Russian and French, the languages of the occupation forces, was projected on the Brandenburg Gate: “Thank You.” (This year the city will commemorate the day more modestly, with wreath-laying ceremonies at memorials.)

Yet the liberation framing is somewhat contentious — because it is unhistorical. Most Germans who experienced May 8, 1945, did not view the Allies as liberators. Nor, for that matter, did Western forces view themselves as such. “Germany will not be occupied for the purpose of liberation but as a defeated enemy nation,” read the directive issued to the commander of American forces that April.

Those who most strenuously object to the “liberation” framing often have noxious reasons. Figures on Germany’s radical right see May 8 as a day of defeat to be lamented, part of a long postwar effort to portray Germans as victims. The anniversary cannot be made into “a happy day for Germany,” Alexander Gauland, a parliamentary leader of the far-right Alternative for Germany, said last year. For those in concentration camps, it was liberation, he said. “But it was also a day of absolute defeat, a day of losing large parts of Germany and losing autonomy.”

But the discussion of May 8 as a day of liberation, however well intentioned, does not just challenge the far-right narrative. It also muddies historical reality and could contribute exactly to what many of those who embrace it wish to avoid: a shunning of historical responsibility. At a time when living memories are disappearing, some Germans — now and in future generations — will take the talk of liberation literally, glossing over the complicity of the masses in Nazi crimes.

For decades after the war, Germans — at least in West Germany — mostly ignored May 8, believing themselves to be largely innocent casualties of history. Hitler and a criminal band surrounding him were responsible, the narrative of denial went, and now Germans were forced to bear the burden of living in a divided and diminished land. As an awareness of the Holocaust and German crimes became more widespread, there was a pushback. Many felt themselves to be victims of their burden of guilt. The wide-scale reckoning with the crimes of the past had barely begun when some politicians began calling for a “Schlussstrich,” a “final line,” that would end the looking back.

It was in an effort to oppose this mentality that on V-E Day in 1985, the president of West Germany, Richard von Weizsäcker, gave a speech that is now considered one of the most important in the country’s postwar history. Germans at the end of the war, he said, felt “exhaustion, despair and new anxiety.” Yet, he went on, “with every day something became clearer, and this must be stated on behalf of all of us today: The 8th of May was a day of liberation. It liberated all of us from the inhumanity and tyranny of the National Socialist regime.”

President Weizsäcker, a conservative, received criticism from members of his own bloc who preferred to forget rather than reinterpret the past. The reaction from East Germany was also notable: The official Communist Party newspaper published a letter by Herbert Mies, the chairman of the German Communist Party — a fringe ally in the West — thanking Mr. Weizsäcker for recognizing the “antifascist resistance” of the Communist liberators. In East Germany, May 8 was for many years celebrated as The Day of Liberation of the German People From Hitler Fascism. The occasion served as a convenient way for the state to advance its antifascist-founding myth, to avoid its own historical reckoning and to demonize West Germany as the heir to Nazism.

While the impulse today to interpret May 8 as a day of liberation — if only through a retrospective lens — is understandable, few seem to have taken into account the danger that many Germans will take the term at face value, as historical reality. But as generations pass, and as the last victims and perpetrators perish, keeping the facts straight becomes even more important.

Despite Germany’s praiseworthy culture of remembrance, many Germans have a jarringly tenuous grasp of the extent of Nazi crimes or the population’s involvement. In a poll commissioned by the German weekly Die Zeit before the 75th anniversary of V-E Day, 53 percent of respondents agreed with the false statement that “it was just a few criminals who instigated the war and killed the Jews.” In another poll commissioned by a German public broadcaster, 23 percent didn’t even have a grasp of what the Holocaust was.

To be clear, German leaders today employ the notion of liberation to embrace their historical responsibility, not to deny it. This was clear when President Frank-Walter Steinmeier spoke on the 75th anniversary of V-E Day. It had taken three generations “for us to wholeheartedly admit” that May 8 is “a day of liberation,” he said. Though the liberation was “imposed from outside,” he said, Germans subsequently played a part in “our internal liberation.” This was a “long and painful process which involved facing up to the past,” he said, and “fighting to stop silence and denial from prevailing.” The process of internal liberation, in other words, meant rejection of a Schlussstrich.

But not all Germans listen to the finer points of such speeches very closely, taking time to reflect on liberation as an internal process. Germany’s culture of remembrance is often highly ritualized, and many leave the task of commemoration up to their political representatives.

The danger is that many in Germany will end up conflating victims and perpetrators, and fail to fully grasp how the Nazis mobilized the masses. The point is not to saddle current and future generations with guilt, but to ensure that the unvarnished truth remains clear. No good lesson can be drawn from history without a full understanding that the guilty were all around, and that they fought to the end.

Nearly 2/3 of Americans are unaware of the Holocaust today. Barely 20% of those in some Southern states even acknowledge that 6 million Jews were killed by the Nazis, while 1 out of 10 believe that Jews actually caused the Holocaust on this 76th anniversary of the allies' arrival in Berlin.

Nazi-run forces were defeated. The country was liberated from their influence. I suppose the truth is both occurred. I do not know the current German population's interpretation of events.
Top

david johnson wrote: ↑
Mon May 10, 2021 2:16 am
Nazi-run forces were defeated. The country was liberated from their influence. I suppose the truth is both occurred. I do not know the current German population's interpretation of events.

You may be interested in this rather brief but inconclusive article from TIME:

maestrob wrote: ↑
Mon May 10, 2021 8:48 am
You may be interested in this rather brief but inconclusive article from TIME:

Brian there was this yesterday from CNN's Fareed. Regards, Len

maestrob wrote: ↑
Mon May 10, 2021 8:48 am
You may be interested in this rather brief but inconclusive article from TIME:

Brian there was this yesterday from CNN's Fareed. Regards, Len

LATER: OK, I figured it out.

Zakaria's reporting is always highly accurate and informative. It was actually quite a relief to hear that the AFD party is now polling at only 11%, while the Greens are more than twice as strong.

Germany's hard right parties, like ours, have always provoked violence throughout the last 100 years. The difference is that such insanity is discouraged there not only by their history but by their constitution, which allows the legal system to expel such parties from government, unlike here, where the former guy and his henchmen ENCOURAGED such tactics.
Top

Len, did you mean to post a link to Twitter? LATER: OK, I figured it out. Zakaria's reporting is always highly accurate and informative.