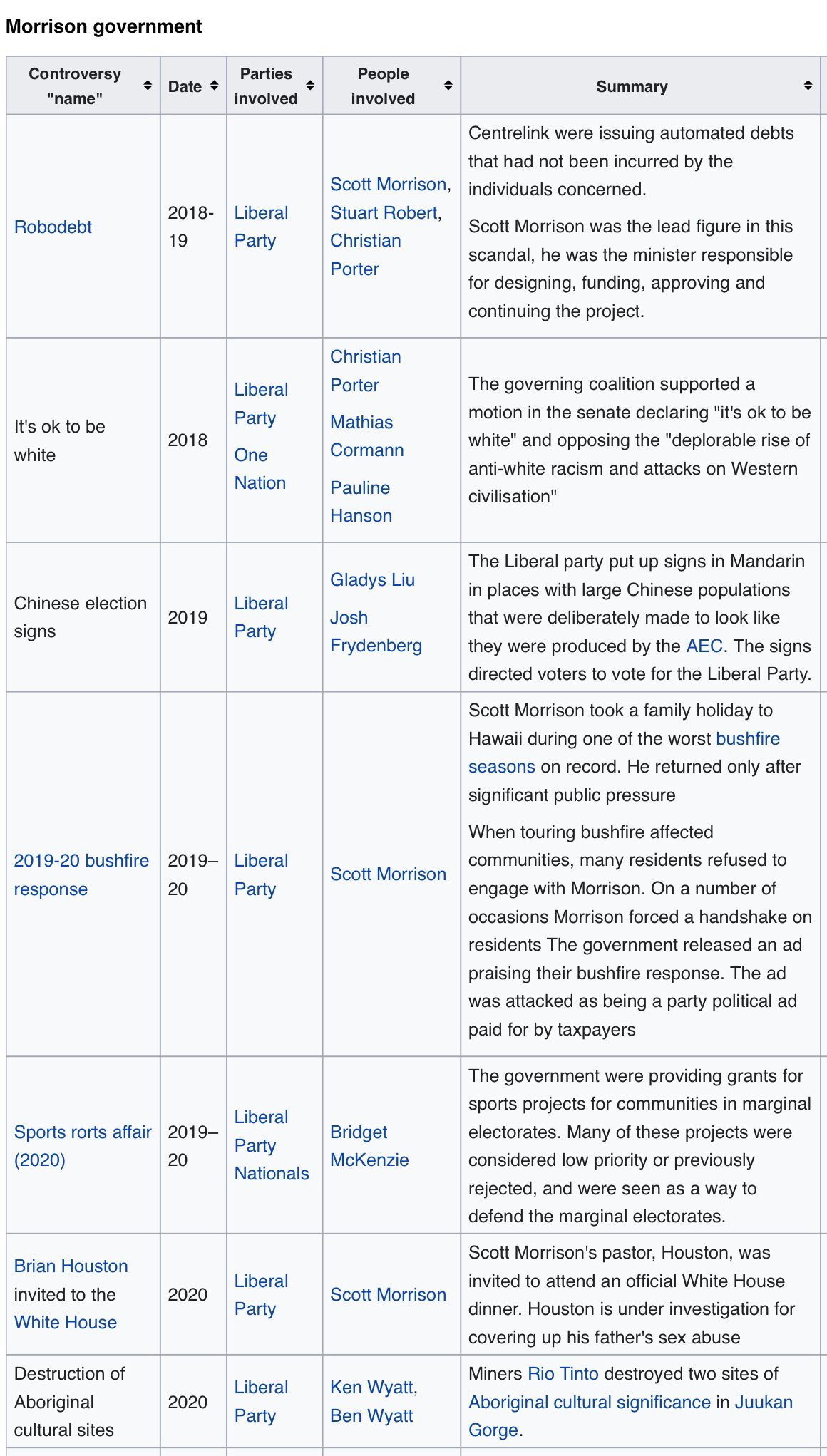 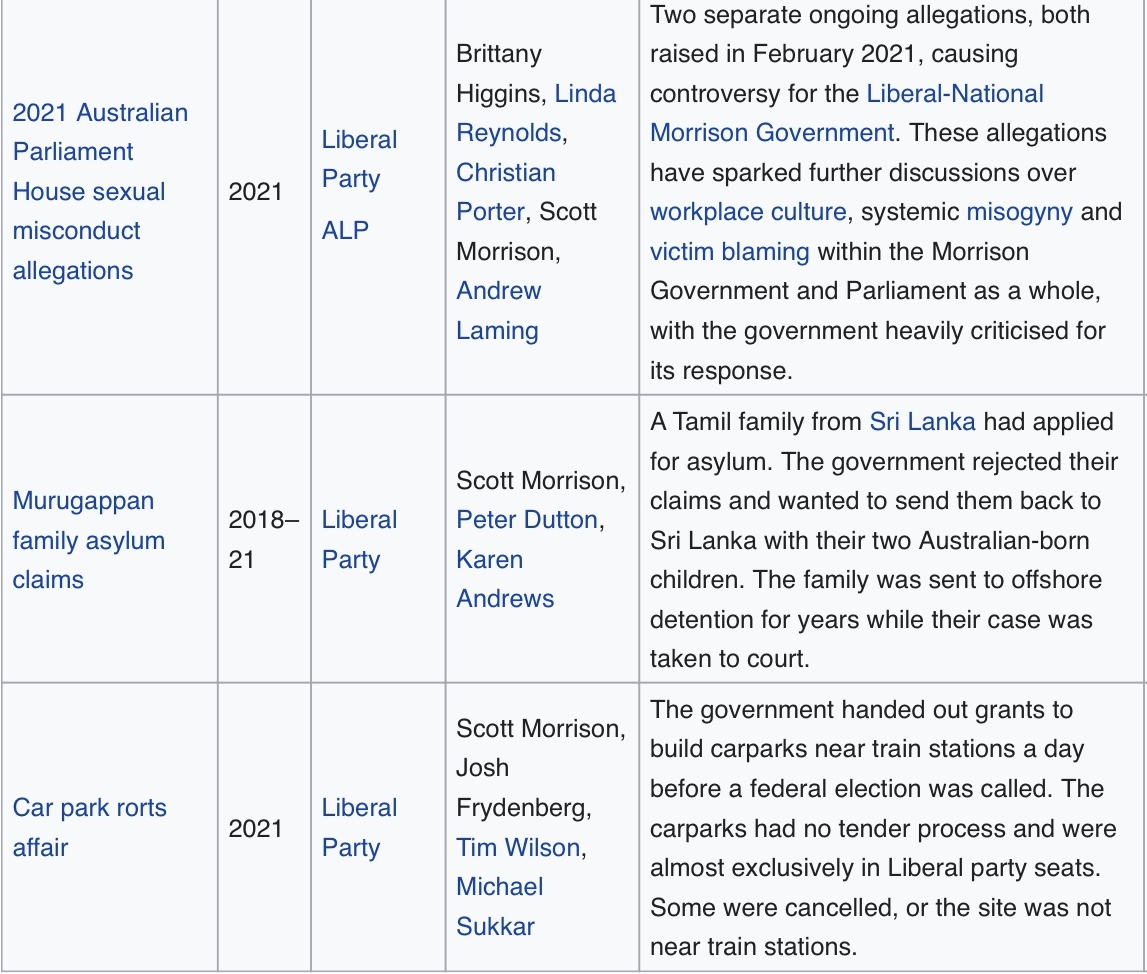 Tip of the iceberg.
Btw, my electorate was one of those promised a station carpark. Never went an inch beyond the pre-election bribe. Nor was it wanted, as it would have changed the low-rise nature of the suburb.
But they're gone now!

barney wrote: ↑
Thu May 26, 2022 9:53 pm
Tip of the iceberg.
Btw, my electorate was one of those promised a station carpark. Never went an inch beyond the pre-election bribe. Nor was it wanted, as it would have changed the low-rise nature of the suburb.
But they're gone now!

The extent of the hatred and antipathy and the desire to rid the polity of Morrison resulted in the lowest primary vote for Labor in 100 years and a thread-bare majority in the House of Representatives, and no majority in the Senate. If you're hanging onto that as a measure of antipathy I fear you are to be very disappointed. If you don't think 76 seats in the federal parliament is problematic you haven't been paying attention.

The Coalition has gone now but no victory is forever, neither is a defeat. The real problem is the disturbing low primary votes now for both of our 2 major political parties and the rise of vested-interest independents, signalling a massive conflict of interest in our polity.

I wish Labor well but on Day 4 they've already reneged on a pledge for the lowest minimum wage of 5%!! And our new Treasurer wants to 'have a conversation' about productivity. What a pity he waited until after the election when their leader literally hid in the basement for 2 weeks like Biden following gaff after gaff. In 26 years in the parliament PM Albanese has demonstrated scant knowledge of economic and immigration facts. That's because for 3 years all he chanted, parrot-like, was Brittney Higgins, Brittney Higgins....ad nauseum.

I met good and decent working class people on the polling booths during the last 2.5 weeks and most of them couldn't abide some of Labor's high profile candidates, nor their identity politics and woke ideologies. The very minute Labor says "coal" and "shutting mines" they have an almighty fight on their hands; and they know it.

The Coalition's mistakes and stuff-ups never amounted to lots of dead people, which was the consequence of Labor's policies within the last 15 years; whether people died on the way to Australia in leaky boats (all enabled by Labor's 'pull factors') or killed in ceiling fires by ill-conceived make-work schemes, the Coalition has a lot of ground to cover to equal those kinds of catastrophes. In fact, in a twisted irony, the Minister who ordered that scheme under PM Rudd was the front-man of a complaint rock band who sang a song called "The Beds are Burning".

The Rio Tinto destruction of the Juukan Gorge/Caves was within the purview of the state Labor government, and not in the federal jurisdiction. But you might be interested to know that certain indigenous people of WA are demanding royalties and payments for land use from Andrew Forrest and his Fortescue Metals Group. This mining magnate has done more than any Australian individual to help and encourage indigenous people through work and philanthropy. And now they've turned on him and are biting the very hand which feeds them.

When you encourage victimhood and grievance in people they do this, or they shoot students in a primary school. Sadly most Lefties don't have the IQ or emotional intelligence to understand any of it.

Apparently it's very important to have aboriginal people in the parliament of Australia - except when they're conservatives, as the people of WA proved when they voted one out last weekend.
"Defund the Thought Police" (Dr. Eric Weinstein, 2021).
"Progressives don't like progress" (Professor Steven Pinker).
Leftism; let's find a cure (Belle).
"In the US and Britain today everything is policed except crime" ('Spiked' reader)
Top

When you encourage victimhood and grievance in people they . . . shoot students in a primary school.

Talk about grievance and victimhood. And neolithic thinking.

Compliments on being such a classy loser. Not given to inflammatory rhetoric.

And at one fell swoop, the globe’s air became a bit more breathable. 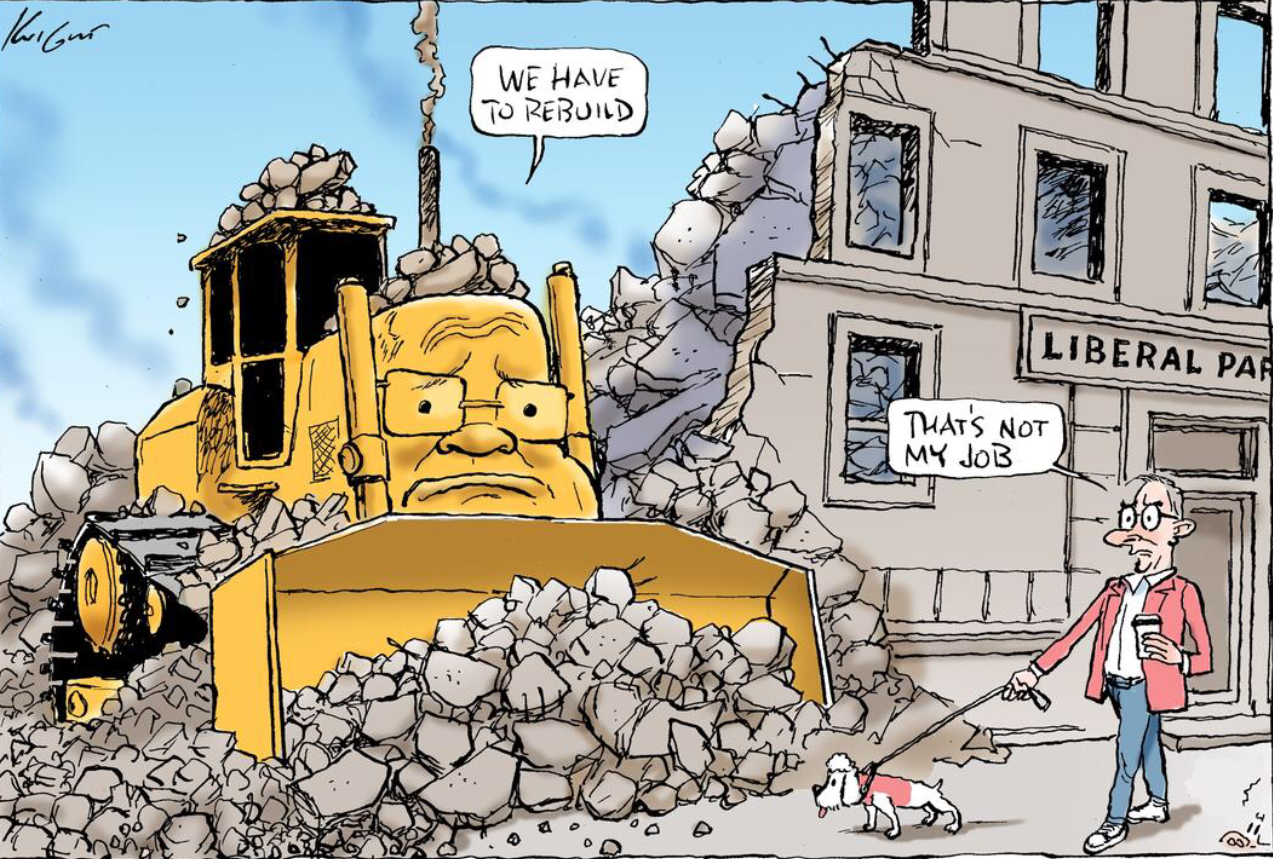 When you encourage victimhood and grievance in people they . . . shoot students in a primary school.

I read in an academic paper last week that 75% of gun massacres are by right-wing sickos and 4% by left-wing sickos. The rest are by Muslims etc. It's not the left that's to be blame for all these children's deaths over the years (we don't know yet about the latest one, but I bet he's not a Democrat supporter), it's the good old grievance-filled whining right. People who think like you, Belle. You're so filled with grievances and fear, and terrified somebody's coming for your substantial assets (as you put it the other day). I can't speak for all Labor voters, obviously, but I'm sure most of us are happy for you to clutch them to your chest and make sure you don't have to help anyone else beyond the reasonable duty of all citizens to pay taxes. But you probably have a family trust to avoid that.
Top
Post Reply
5 posts • Page 1 of 1