Firing of U.S. Ambassador Is at Center of Giuliani Investigation

Firing of U.S. Ambassador Is at Center of Giuliani Investigation 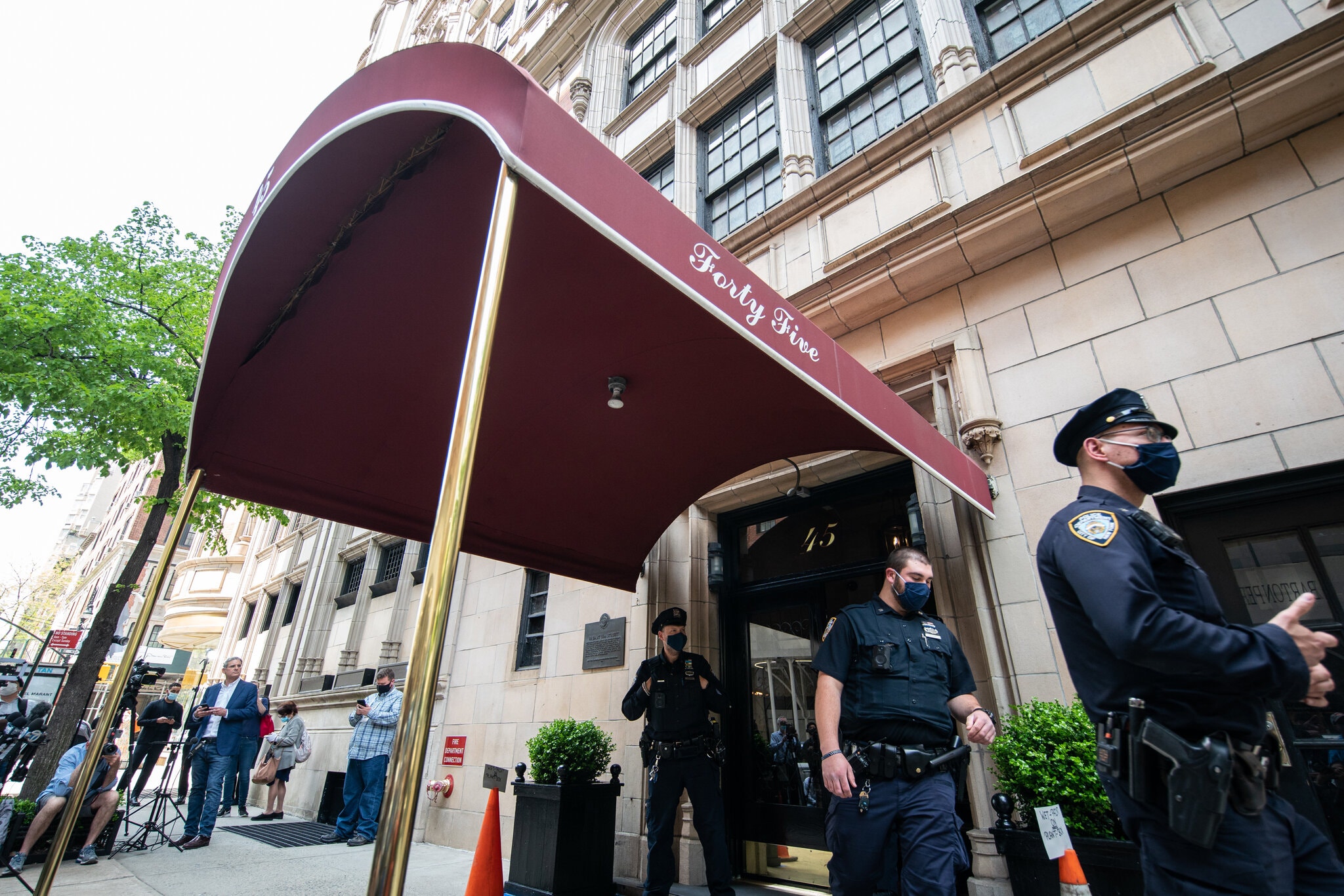 Prosecutors want to scrutinize Rudolph W. Giuliani’s communications with Ukrainian officials about the ouster of the ambassador, Marie L. Yovanovitch.

Two years ago, Rudolph W. Giuliani finally got one thing he had been seeking in Ukraine: The Trump administration removed the U.S. ambassador there, a woman Mr. Giuliani believed had been obstructing his efforts to dig up dirt on the Biden family.

It was a Pyrrhic victory. Mr. Giuliani’s push to oust the ambassador, Marie L. Yovanovitch, not only became a focus of President Donald J. Trump’s first impeachment trial, but it has now landed Mr. Giuliani in the cross hairs of a federal criminal investigation into whether he broke lobbying laws, according to people with knowledge of the matter.

The long-running inquiry reached a turning point this week when F.B.I. agents seized telephones and computers from Mr. Giuliani’s home and office in Manhattan, the people said. At least one of the warrants was seeking evidence related to Ms. Yovanovitch and her role as ambassador, the people said.

In particular, the federal authorities were expected to scour the electronic devices for communications between Mr. Giuliani and Trump administration officials about the ambassador before she was recalled in April 2019, one of the people added.

The warrant also sought his communications with Ukrainian officials who had butted heads with Ms. Yovanovitch, including some of the same people who at the time were helping Mr. Giuliani seek damaging information about President Biden, who was then a candidate, and his family, the people said.

At issue for investigators is a key question: Did Mr. Giuliani go after Ms. Yovanovitch solely on behalf of Mr. Trump, who was his client at the time? Or was he also doing so on behalf of the Ukrainian officials, who wanted her removed for their own reasons?

It is a violation of federal law to lobby the United States government on behalf of foreign officials without registering with the Justice Department, and Mr. Giuliani never did so.

Even if the Ukrainians did not pay Mr. Giuliani, prosecutors could pursue the theory that they provided assistance by collecting information on the Bidens in exchange for her removal.


One of the search warrants for Mr. Giuliani’s phones and computers explicitly stated that the possible crimes under investigation included violations of the law, the Foreign Agents Registration Act, according to the people with knowledge of the matter.

Mr. Giuliani has long denied that he did work at the behest of the Ukrainians, or that he accepted any money from them, and he has said that he did not expressly urge Mr. Trump to fire the ambassador.

Keep up with the new Washington — get live updates on politics.

Mr. Giuliani’s work to oust Ms. Yovanovitch was part of a larger effort to attack Joseph R. Biden Jr. and tie him to corruption in Ukraine, much of which played out in public.

But intelligence officials have long warned that Mr. Giuliani’s work in Ukraine had become ensnared with Russia’s efforts to spread disinformation about the Biden family to weaken Mr. Trump’s election rival.

The F.B.I. stepped up its warnings about Russian disinformation before the 2020 election, including giving a defensive briefing to Mr. Giuliani, cautioning him that some of the information he was pushing on the Biden family was tainted by Russian intelligence’s efforts to spread disinformation, according to a person briefed on the matter.

The F.B.I.’s defensive briefings are given by its counterintelligence officials and are separate from the criminal inquiry of Mr. Giuliani’s activities. The defensive briefing was reported earlier Thursday by The Washington Post.

But the warnings to Mr. Giuliani are not surprising. Senior officials had warned Mr. Trump in late 2019 that Mr. Giuliani was pushing Russian disinformation, and the intelligence community had warned the American public that Moscow’s intelligence services were trying to hurt Mr. Biden’s election chances by spreading information about his family’s work in Ukraine.

On Wednesday, after F.B.I. agents seized his devices, Mr. Giuliani again denied any wrongdoing. He said the search warrants demonstrated a “corrupt double standard” on the part of the Justice Department, which he accused of ignoring “blatant crimes” by Democrats, including Mr. Biden.

Asked about the search warrants on Thursday, Mr. Biden told NBC’s “Today” show that he “had no idea this was underway.” He said he had pledged not to interfere in any investigation by the Justice Department.

The warrants do not accuse Mr. Giuliani of wrongdoing, but they underscore his legal peril: They indicate a judge has found that investigators have probable cause to believe that a crime was committed and that the search would turn up evidence of that crime.

The investigation grew out of a case against two Soviet-born businessmen, who had helped Mr. Giuliani search for damaging information about Mr. Biden and his son, Hunter. At the time, Hunter Biden served on the board of an energy company that did business in Ukraine.

In 2019, the businessmen, Lev Parnas and Igor Fruman, were charged in Manhattan, along with two others, with unrelated campaign finance crimes. A trial is scheduled for October.

In the Giuliani investigation, the federal prosecutors have focused on the steps he took against Ms. Yovanovitch. Mr. Giuliani has acknowledged that he provided Mr. Trump with detailed information about his claim that she was impeding investigations that could benefit Mr. Trump, and that Mr. Trump put him in touch with Secretary of State Mike Pompeo.

After a few aborted attempts to remove her, Ms. Yovanovitch was ultimately recalled as ambassador in late April 2019 and was told that the White House had lost trust in her.

Mr. Giuliani said in an interview in late 2019 that he believed the information he had provided the Trump administration did contribute to Ms. Yovanovitch’s dismissal. “You’d have to ask them,” he said of the Trump officials. “But they relied on it.” He added he never explicitly requested that she be fired.

The prosecutors have also examined Mr. Giuliani’s relationship with the Ukrainians who had conflicts with Ms. Yovanovitch, according to the people with knowledge of the matter. While ambassador, Ms. Yovanovitch had taken aim at corruption in Ukraine, earning her quite a few enemies.


The investigation has zeroed in on one of her opponents, Yuriy Lutsenko, the top prosecutor in Ukraine at the time, the people said. At least one of the search warrants for Mr. Giuliani’s devices mentioned Mr. Lutsenko and some of his associates, including one who helped introduce him to Mr. Giuliani.

The relationship had the potential to become symbiotic.

Mr. Lutsenko wanted Ms. Yovanovitch removed, and as the personal lawyer to the president, Mr. Giuliani was positioned to help. Mr. Giuliani wanted negative information about the Bidens, and as the top prosecutor in Ukraine, Mr. Lutsenko would have had the authority to announce an investigation into Hunter Biden’s dealings with the energy company. Mr. Giuliani also saw Ms. Yovanovitch as insufficiently loyal to the president, and as an impediment to the investigations.

Mr. Lutsenko hinted at a potential quid pro quo in text messages that became public during the impeachment trial. In March 2019, Mr. Lutsenko wrote in a Russian language text message to Mr. Parnas that he had found evidence that could be damaging to the Bidens. Then he added, “And you can’t even bring down one idiot,” in an apparent reference to Ms. Yovanovitch, followed by a frowny-face emoji.

Around that same time, Mr. Giuliani was in negotiations to also represent Mr. Lutsenko or his agency, The New York Times has previously reported. Draft retainer agreements called for Mr. Giuliani to receive hundreds of thousands of dollars to help the Ukrainian government recover money it believed had been stolen and stashed overseas.

Mr. Giuliani signed one of the retainer agreements, but he said he ultimately did not take on the work, because his representation of Mr. Trump at the same time could constitute a conflict of interest.

When Ms. Yovanovitch testified during Mr. Trump’s impeachment hearings in late 2019, she told lawmakers that she had only minimal contact with Mr. Giuliani during her tenure as ambassador.

“I do not know Mr. Giuliani’s motives for attacking me,” she said. “but individuals who have been named in the press who have contact with Mr. Giuliani may well have believed that their personal and financial ambitions were stymied by our anti-corruption policy in Ukraine.”


Ben Protess is an investigative reporter covering the federal government, law enforcement and various criminal investigations into former President Trump and his allies.

William K. Rashbaum is a senior writer on the Metro desk, where he covers political and municipal corruption, courts, terrorism and broader law enforcement topics. He was a part of the team awarded the 2009 Pulitzer Prize for breaking news.

Ken Vogel covers the confluence of money, politics and influence from Washington. He is also the author of “Big Money: 2.5 Billion Dollars, One Suspicious Vehicle, and a Pimp — on the Trail of the Ultra-Rich Hijacking American Politics.”

Users browsing this forum: No registered users and 20 guests