After a Year of Loss, South America Suffers Worst Death Tolls Yet

After a Year of Loss, South America Suffers Worst Death Tolls Yet

If the world doesn’t stop the region’s surging caseload, it could cost us all that we’ve done to fight the pandemic, one health official said.

BOGOTÁ, Colombia — In the capital of Colombia, Bogotá, the mayor is warning residents to brace for “the worst two weeks of our lives.”

Uruguay, once lauded as a model for keeping the coronavirus under control, now has one of the highest death rates in the world, while the grim daily tallies of the dead have hit records in Argentina, Brazil, Colombia and Peru in recent days.

Even Venezuela, where the authoritarian government is notorious for hiding health statistics and any suggestion of disarray, says that coronavirus deaths are up 86 percent since January.

As vaccinations mount in some of the world’s wealthiest countries and people cautiously envision life after the pandemic, the crisis in Latin America — and in South America in particular — is taking an alarming turn for the worse, potentially threatening the progress made well beyond its borders.

Last week, Latin America accounted for 35 percent of all coronavirus deaths in the world, despite having just 8 percent of the global population, according to data compiled by The New York Times.

Latin America was already one of the world’s hardest hit regions in 2020, with bodies sometimes abandoned on sidewalks and new burial grounds cut into thick forest. Yet even after a year of incalculable loss, it is still one of the most troubling global hot spots, with a recent surge in many countries that is even more deadly than before.

But the region has another thorny challenge, health officials say: living side-by-side with Brazil, a country of more than 200 million whose president has consistently dismissed the threat of the virus and denounced measures to control it, helping fuel a dangerous variant that is now stalking the continent.

The length of Latin America’s epidemic makes it even harder to fight. The region has already endured some of the strictest lockdowns, longest schools closures and largest economic contractions in the world.

Inequality, a longstanding scourge that had been easing before the pandemic, is widening once again, and millions have been tossed back into the precarious positions they thought they had escaped during a relative boom. Many are venting their anger in the streets, defying official pleas to stay home.

“They’ve taken so much from us that we’ve even lost our fear,” read a sign held by Brissa Rodríguez, 14, at a protest with thousands of others in Bogotá on Wednesday.


Experts worry that Latin America is on a path to becoming one of the globe’s longest-haul Covid patients — leaving public health, economic, social and political scars that may run deeper than anywhere else in the world.


“This is a story that is just beginning to be told,” Alejandro Gaviria, an economist and former health minister of Colombia who leads the nation’s Universidad de los Andes, said in an interview.

“I have tried to be optimistic,” he also wrote in a recent essay. “I want to think that the worst is over. But that turns out, I believe, to be counter-evident.”

If Latin America fails to contain the virus — or if the world fails to step in to help it — new, more dangerous variants may emerge, said Dr. Jarbas Barbosa of the Pan-American Health Organization.

“This could cost us all that the world is doing” to fight the pandemic, he said.

He urged leaders to work as fast as possible to provide equal access to vaccines for all countries.

“The worst-case scenario is the development of a new variant that is not protected by current vaccines,” he said. “It’s not just an ethical and moral imperative, but a health imperative, to control this all over the world.”

The spread of the virus in the region can be attributed at least in part to a variant called P.1 first identified in the Brazilian city of Manaus late last year.


Manaus, the largest city in the Brazilian Amazon, was devastated by the virus in mid-2020. But the second wave there was worse than the first.


While the data is far from conclusive, initial studies indicate that P.1 is more transmissible than the initial virus, and is associated with a higher death rate among younger patients and patients without pre-existing conditions. It can also reinfect people who have already had Covid, though it’s unclear how often that occurs.

P.1 is now present in at least 37 countries, but appears to have spread most thoroughly through South America, said William Hanage, an epidemiologist at Harvard University.

Across the region, doctors say that the patients coming into hospitals are now far younger and far sicker than before. They’re also more likely to have had the virus already.

In Peru, the National Health Institute documented 782 cases of likely reinfection in the first three months of 2021 alone, a surge from last year. Dr. Lely Solari, an infectious disease doctor with the institute, called this “a very significant underestimate.”

Official daily death tolls have exceeded previous records in recent days in most of South America’s biggest countries. Yet scientists say that the worst is yet to come.


The director of epidemiology in Colombia’s health ministry, Julián Fernández, said it was likely that variants — including P.1 and another variant first found in Britain last year — would be the dominant strains of the virus within two or three months.

The region is not prepared. Colombia has been able to issue a first vaccine to just 6 percent of its population, according to Our World in Data, a project at the University of Oxford. Several of its neighbors have achieved half that, or less.

By contrast, the United States, which bought up vaccines ahead of other countries, is at 43 percent.

Peru, the fifth most populous country in Latin America, has emerged as a microcosm of the region’s mounting struggles.


Like many of its neighbors, Peru made significant economic progress in the last two decades, using raw material exports to lift income, shrink inequality and raise middle-class dreams. But the boom brought few stable jobs, led to little health care investment and failed to contain the region’s other scourge — corruption.

The virus arrived in Peru in March last year, like much of Latin America, and the government moved quickly to lock down the country. But with millions of people working in the informal sector, enforcing quarantines became unsustainable. Cases rose quickly and hospitals soon fell into crisis. By October, the country became the first in the world to record more than 100 deaths per 100,000 inhabitants.

The actual death toll is far higher, because many of the dead have not been included in the official count of coronavirus patients.


Then, mercifully, new cases began to subside. A government study in the capital, Lima, found that 40 percent of residents had coronavirus antibodies. Officials said the population had reached such a high level of immunity that a second wave might not be so bad. The government opted not to impose a lockdown during Christmas and New Year’s celebrations.

But in January, just as the United States and other nations began robust, if sometimes chaotic, vaccine rollouts, a second surge began in Peru — and this wave has been even more brutal than the first.

Last month was the deadliest of the pandemic by far, according to official data, with health experts blaming the increase on holiday gatherings, crippled health systems and the new variants.

Vaccines arrived in Peru in February, followed quickly by anger after some politically connected people jumped the line to get vaccinated first. More recently, multiple government agencies have begun investigating whether some health workers have asked for bribes in exchange for access to scarce hospital beds.


“It was that or let her die,” said Dessiré Nalvarte, 29, a lawyer who said she helped pay about $265 to a man who claimed to be the head of the intensive care unit at a hospital in order to get treatment for a family friend who had become sick.

The crisis has plunged nations like Peru into grief, ripping at the social fabric. This month, thousands of poor and newly poor Peruvians began to occupy empty swaths of land in southern Lima, with many saying that they were doing so because they had lost their livelihoods amid the pandemic.

Rafael Córdova, 50, a father of three, sat on a square drawn in the sand that marked his claim to land overlooking the Pan-American Highway and the Pacific Coast.

Before the pandemic, he explained, he was a supervisor in the human resources department of a local municipality, and had a grip — or so he thought — on stability.

Then, in May, he became sick with Covid and was fired. He believes his bosses let him go because they feared that he would sicken others, or that his family would blame them if he died.


He now struggles to pay for minutes on the one family phone so that his children can do class work. Meals are small. Debts are mounting. “Today I went to the market and bought a bag of fish bones and made soup,” he said.

He says he has lost an aunt, a sister-in-law and a cousin to Covid, as well as friends. In June, his wife, who had also had Covid, gave birth to twins prematurely. One daughter died days after birth, he said, and the second died about a month later. He had no money for a proper burial.

“I left the hospital with my daughter in a black plastic bag and got in a taxi and went to the cemetery,” he said. “There was no Mass, no wake. No flowers. Nothing.”

When he heard about the occupation, he said he was three months behind on rent and feared eviction. So he made a run for the hill, pitching a tent that became his new home.

A week later, the police arrived, set off tear gas — and booted him and thousands of others from their camp. 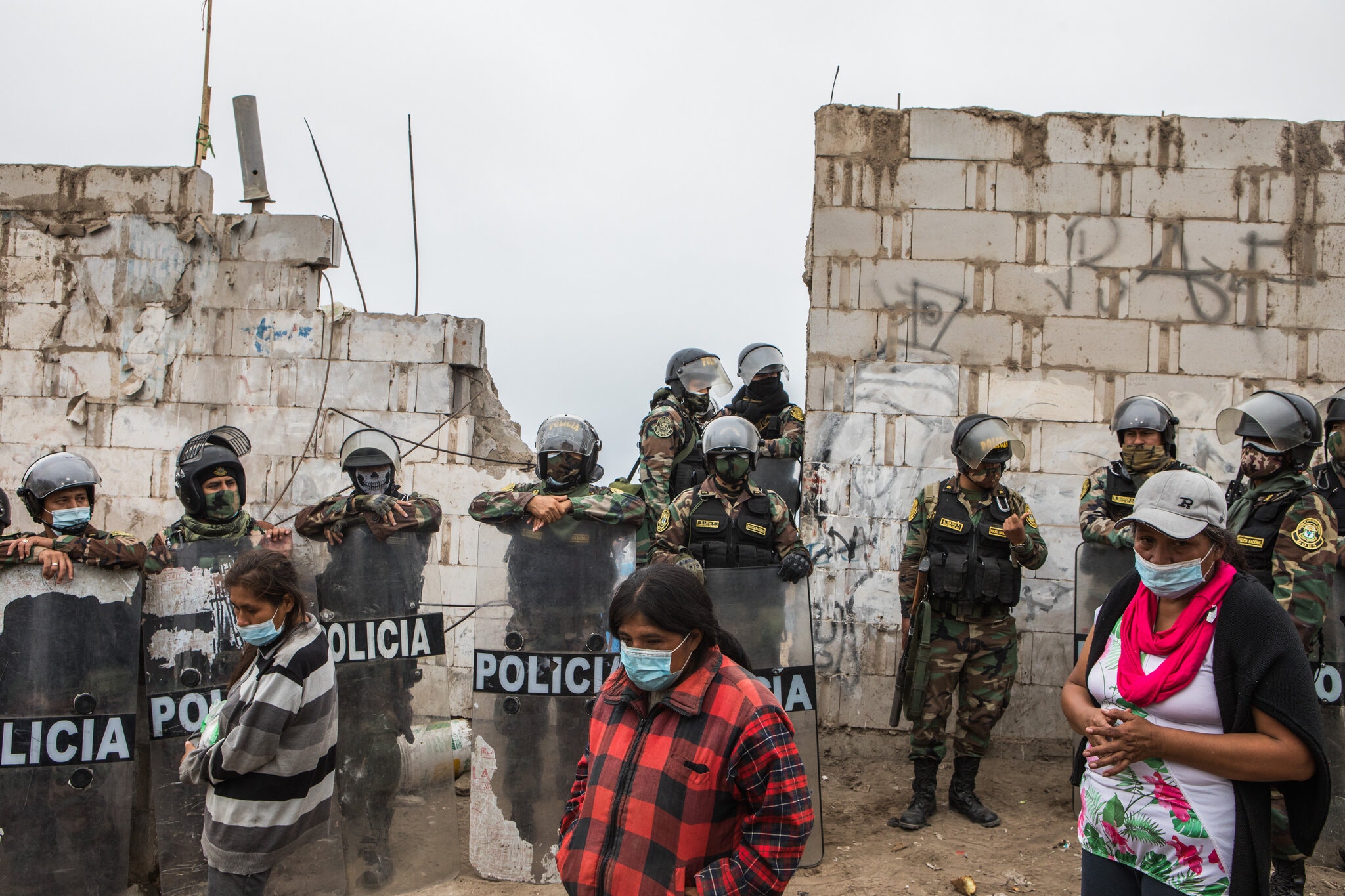 Police evicting squatters from a hillside on private and state property in southern Lima on Wednesday.Credit...Marco Garro for The New York Times